Janice Dickinson: Bill Cosby Assaulted Me Too In 1982

Janice Dickinson was a bonafide supermodel in the 1982 and that’s when Bill Cosby came a calling..

Dickinson is claiming the comedian assaulted her back in the day. 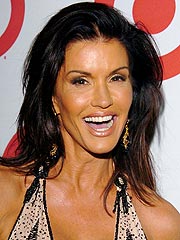 In a recent interview, Dickinson said she met Cosby in Lake Tahoe at his urging after he said that he would help her with her singing career. They had met earlier when her agent had introduced them, hoping that she could get a job on “The Cosby Show.”

Dickinson said that after dinner, she and Cosby were in her hotel room and that he gave her some red wine and a pill. She told “Entertainment Tonight” she had asked for a pill because she had been suffering stomach pains.

“The next morning I woke up and I wasn’t wearing my pajamas and I remembered before I passed out I had been sexually assaulted by this man,” she said. She said she remembered Cosby dropping the robe he had been wearing and getting on top of her. h/t AP

She said she never confronted Cosby about the incident.