This is probably a hoax, but that did not stop a bunch of girls from going “Bald For Bieber,” shaving their heads in support of Justin Bieber’s FAKE health scare! 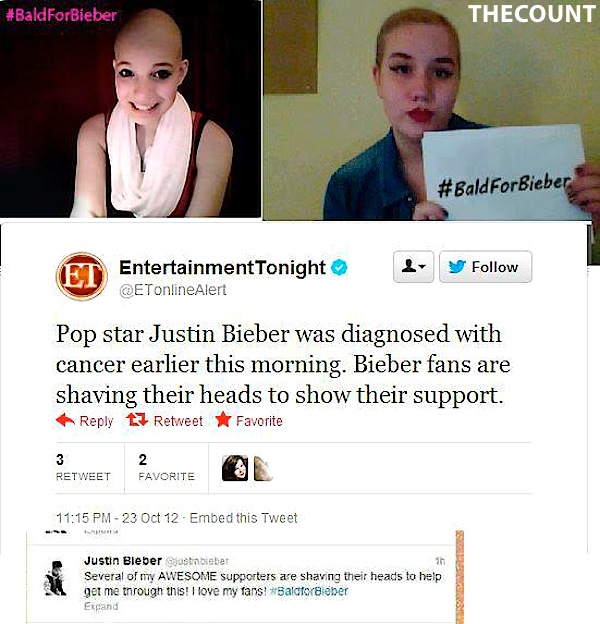 My mom always said that the most dangerous lies are the ones mixed with truth. That’s why the internet, namely Twitter, can be such a spurious environment. We sometimes forget that with the real-time, viral benefits of the short-winded social network come the same negative effects. Truth can spread like wildfire, and so can lies.

Today, the Bieber nation has learned that lesson. Behold, dear readers, the horror.

“Pop Star Justin Bieber was diagnosed with cancer earlier this morning. Bieber fans are shaving their heads to show their support.”

Justin apparently responded back saying thanks for the support, and a picture of the Twitter conversation along with two images of bald Bieber fans started making its way on the internet.

In reality, 4chan was trolling Beliebers. There were no tweets to begin with, and there definitely isn’t any cancer. 4chan peeps simply photoshopped together an image and sent it out into the world.

Unfortunately now, there are likely dozens of bald tweenage girls crying in their bathrooms. And it’s perhaps even more insane that most members of the Bieber nation still believe that Justin has cancer, and are pouring sympathy, condolences, and heartfelt love into the #baldforbeiber hashtag, despite the fact that the other half of that Twitter conversation is lawling over the hoax.

We’ve seen this type of Twitter misuse cause problems before. Morgan Freeman and his delicious voice were rumored to be dead, and that NJ girl scared the crap out of everyone when she said there was an invader in her house on Twitter. (Really, she just was running away from home.)

In any case, this should serve as an excellent reminder to all of us. Just because you read it on Twitter, doesn’t mean it’s true.