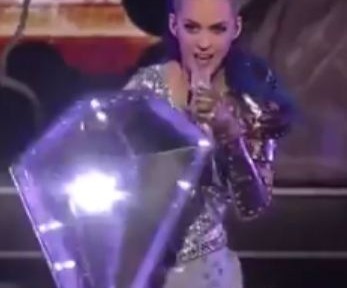 Perry’s recent divorce with Russell Brand hasn’t seemed to cramp her style, nor has she seemed upset about the split. Perry is going on with business as usual, except for the quick change she may have made- rearranging the entire performance at last night’s Kids Choice Awards show.

Perry recently received a lot of slack with various bloggers, who claimed that her newest music video “Part Of Me”, was basically a ‘big push to entice kids to join the military’ and ‘promoted war’. In the music video, Perry glamorized joining the Marines, after a break-up with her on-screen boyfriend.

Perry isn’t the only pop star who is glamorizing war, as is Rihanna, who is starring in the upcoming Summer action film “Battleship”, where Rihanna plays a bad-ass soldier who loves to fight.

After having her cover blown, Perry and her team may have switched Perry’s Kids Choice Awards performance from ‘army-themed’, to a more of a innocent ‘knight’s tale’ theme, which some say is ‘castle programming’ or ‘princess programming’, which means that the agenda is still being pushed to be violent and controlling like the ‘army theme’, but it also has a sense of romance and glamour. 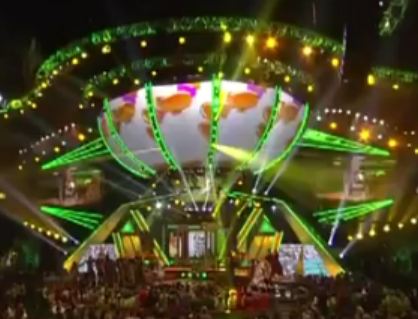 Throughout the show, I also noticed so many other strange occurrences that made me feel uneasy, like the Egyptian pyramid shapes sitting on the stage, the Nickelodeon drone-shaped blimps floating around, and even smaller drone blimps being given away as awards. The continuity of the entire show was off, as the insert shots of kids clapping were taped at a different time- the kids present at the show looked bored, tired and uncomfortable. Another military programming moment I noticed was when host Will Smith and guest Taylor Lautner were doing a push-up contest in front of an area with a sign that read ‘Boot Camp’. 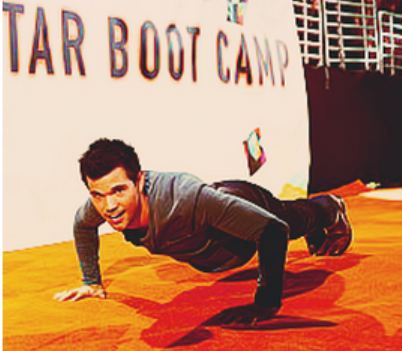 Let’s get back to Katy Perry’s performance, as I have broken it down for you guys to read, and accompanied the performance breakdown with photos too.

Perry showed up to the event, looking as if she were already ‘slimed’, as Perry was wearing a sports bra dipped in lime green latex paint, that had been dried and set to look like slime were dripping from the bra. Perry bared a a few inches of her stomach, wearing a short, stretch-band skirt with the sports bra. Perry’s hair was also dramatized, pulled up in a ponytail, with a huge purple and blue hair extension that hung from her ponytail. 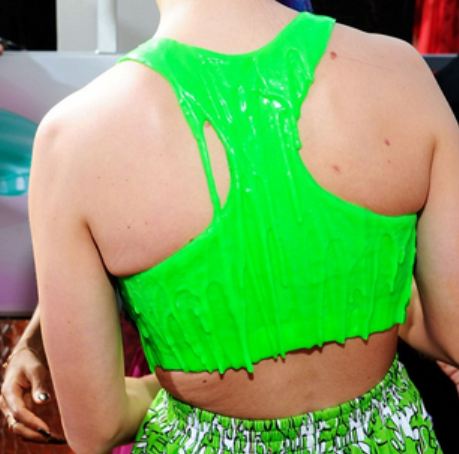 When Perry was called up to perform, she made a grand entrance by ‘flying’ onto the stage, wearing a new blue and silver Renaissance-esque knight costume, that was accessorized with metal body armor. Attached to wires that were hanging from the ceiling, Perry flew in toward the stage, pointing a sword, in a pose similar to “Peter Pan’s” famous pose. 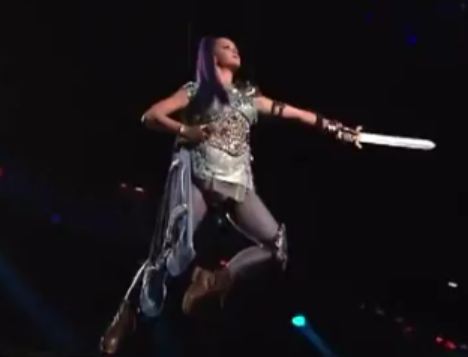 Renaissance-style dressed dancers and actors awaited Perry as she landed on the stage, on top of a picnic table with food, drinks and people. Perry began singing on the table, which was in front of a large video screen showing castle imagery, as her dancers were unhooking her from the wires. 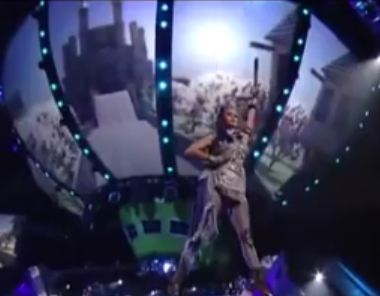 A light-skinned ‘King’ and a dark-skinned ‘Queen’ sat in the back of the performance in ‘thrones’, while Perry worked the stage back and forth as she normally does- singing and doing some dance choreography with the dancers. After about a minute into the song, Perry and her dancers paired up in twos as they performed a Renaissance couples dance.

In the middle of the song, Perry grabs a sparkly diamond-shaped metal shield, which she creeps up on the audience of children with. Perry turns on the spotlight built into the shield, and shines the light into the childrens’ eyes, as it is also translated perfectly to viewers watching the show at home as well.

At the end of the song, Perry walked over to the actor who was playing ‘The King’, and demanded he come with her, as she placed his head in a ‘guillotine’, to look as if he were going to be be-headed. Perry was presented with a creme pie, given to her by one of her dancers. Perry skips over to the King, and smacks his face with the pie, and the song is over. 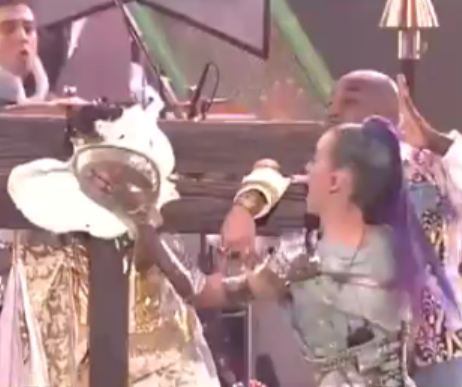 Will Smith who was hosting his the show, comes over to Perry and gives her a ‘surprise’ drone-shaped Nickelodeon award for ‘favorite voice in an animated movie’ for her voice over work in “The Smurfs”. Perry acts exceptionally thrilled to win, as Smith hands her the drone-looking award. Perry tells the audience “The only reason why I’m still here today, and remember this… is because I’ve never grown up!” Inserts are shown of the audience, who look overly thrilled about Perry’s win, as a re-occurring long-shot of the pyramid shaped stage that is shown throughout the show, seals Perry’s moment. 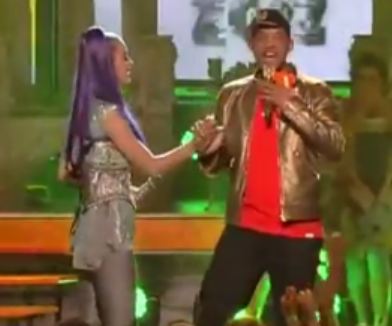 So what’s the point of all of this? I can’t be completely sure about everything, but I do know that these sorts of award shows are sliced with subliminal messages, to get viewers to buy products from whatever stars are featured on the show, and maybe, even program people into doing things with their lives that they would have never done if they hadn’t watched the show.