After “The Walking Dead” season 2 finale on AMC, fans flooded TheCount.com to read my recap of the finale. Since then, I’ve gathered some reoccurring viewpoints and opinions from fans, who are pondering some of the same questions. 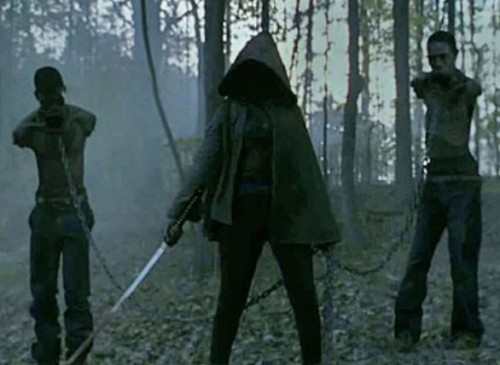 Towards the end of the finale, when Andrea was about to become zombie dinner, an important new character was revealed in the midst of saving Andrea’s life. This new character, “Michonne”, who some are calling the ‘bad-ass Samurai sword chick’, was revealed for a short amount of time, with no explanation of who she is or where she came from. Fans have been left baffled, not only because of the mystique surrounding Michonne, but some have been left ‘wary’ about next season, since Michonne had two CGI-created, arm-less zombies on chained leashes.

But fans aren’t wary about the arm-less zombies on chained leashes, as most fans understand that the new Michonne character uses the zombies to fend off other zombies’ sense of smell whilst hunting the living. Fans are wary about the heavy CGI used to create the zombies.

Many fans are not only left wondering ‘what’s in store next season?’, but some fans are wondering if the show is going to go into a CGI ‘Fantasy’ style of production.

Obviously the show already has CGI in some instances, but if season 3 becomes ‘fantasy-like’ or has a larger amount of CGI, will you still watch it? Leave us your comment below in the comments section!