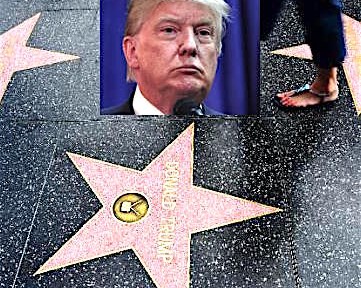 Donald Trump’s “Hollywood Walk of Fame” star was defaced with what appears to be a backward swastika.

A photo of the front runner’s star, located on Hollywood boulevard, was uploaded to image sharing site IMGUR and then shared on Reddit. An unknown vandal used black spray paint to display a backward swastika. It is not known whether or not the suspect meant to place the offensive symbol in a reversed position.

Maintenance crews were dispatched to power wash the star. It is not the first time the presidential candidate’s marker has been defaced, in September, 2015, someone drew a yellow “X” on the star.