Tyga: I Facetimed Girl 14 To Hear Her Sing 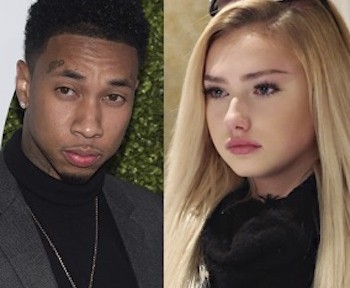 O’Malia claimed that Tyga sent her “uncomfortable” messages, and that she continued conversation with him with hopes that his motivations were about her music. Now, in response to O’Malia, Tyga’s manager is offering his side of the story. The rapper’s attorney, Anthony Martini, states that Tyga’s messages to O’Malia were “strictly business and completely PG.” Martini said that his client was scouting the aspiring singer to be a part of a project for his Last Kings Records imprint. According to the site, text message conversations were obtained in which O’Malia claims to be 17 years old. “Tyga wanted to FaceTime Molly to talk business and see her sing … as he sat in the studio with his producers,” the report reads. h/t vibe

O’Malia version of the story depicts her as a hopeful singer, one who allegedly awaited Tyga’s subsequent messages for a mention to be made about her music. “I knew who he was, but I was surprised that he was contacting me,” Molly said. “I thought that it could possibly be about my music, but he did not mention that in his initial communication with me. I thought that was strange, but I was thinking he would bring that up in his next message to me. However, he didn’t mention it in the next message.”