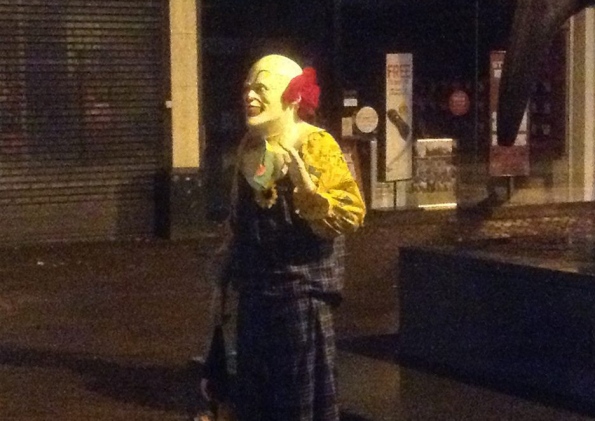 Witnesses have said to see him on sidewalks just smiling as he waves to on lookers and even then, going as far as knocking on people’s doors!

Now, that may be taking it a little bit too far!

He even has a Facebook Fan page glorifying what he sees as harmless entertainment. With 138 thousand followers, he is now becoming a hit sensation.

The mysterious clown told Canoe.ca News, “Most people enjoy being a bit freaked out and then they can laugh about it afterwards…naturally, some people would have been extremely frightened by what they saw, but I hope many are starting to see it as a bit of harmless fun.”

Well, not everyone see it as a laughing matter.

Residents took to Twitter just how uncomfortable they are because of the clown’s strange presence.

One commentator by the name of Ellie Moreton said ”I’m not gonna lie… I’m a lil scared about leaving the house at night with the #northhamptonclown lurking around.”

While others are terrified of spotting out the clown, there are those who make jokes out of the situation.

The Media Blog tweeted, “Getting the kids ready for bed…? Why not tell them the story of the #NorthamptonClown?”

Well, that’s a good way to get your kids to run into your room in the middle and terrorize your bed because of nightmares!