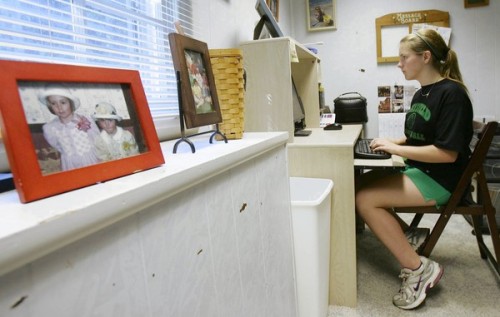 [20080921 (Bulldog/A32) — TYPICAL TEEN: Mary Lee, 13, of suburban Cleveland says she spends more time on the computer now than in the past. — PHOTOGRAPHER: Tony Dejak  Associated Press] *** [Mary Lee is shown chatting with friends online, Monday, July 14, 2008, in Mayfield Heights, Ohio. Among a nationwide group of about 1,000 American children followed for several years, 90 percent were physically active for at least two hours each weekday at age nine. But by age 15, that plummeted to less that 3 percent of kids. (AP Photo/Tony Dejak)] ** Usable by LA and DC Only **