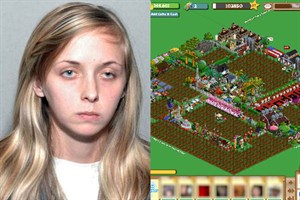 Internet game/app “FarmVille”, who is owned by company “Zynga”, has gotten a bad rep as of late for selling users’ info to advertisers without the users’ permission. Now FarmVille is in even hotter water today because a young mother has confessed to ‘snapping during a Facebook game of Farmville, and killing her son’ so she could concentrate on her game!

This 22 year old Jacksonville, FL woman by the name of Alexandra Tobias, has admitted to shaking her three-month-old baby to death because “his cries kept interrupting her game of FarmVille”! She now faces up to life in prison for the murder.

She told investigators during the shaking, she stopped to have a cigarette to calm down, then shook him again, and said she “maybe” struck him. He then died.

A bad case of “social media addiction” aka SMA?