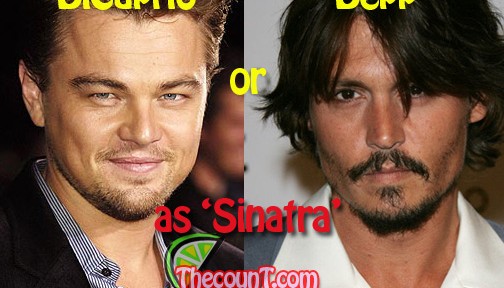 Who could play the legendary Frank Sinatra on the big screen? Who could portray him the best? Who looks close enough to Frank? Is there an ‘A’ list actor with blue eyes like Frank’s?

Would Universal/Scorsese cast a newbie actor?

According to Deadline Hollywood Daily, Martin Scorsese has put Johnny Depp at the top of his wish list of actors to play Ol’ Blue Eyes.

But Entertainment Weekly reports “Scorsese had reportedly been eyeing longtime collaborator Leonardo DiCaprio (Gangs of New York, The Aviator, The Departed) for the lead role. But now that the Universal produced ‘period piece’ film Public Enemies, starring Johnny Depp and Christian Bale, looks like a potential winner, the studio is eager to line up Depp’s next high-profile project. [As if Depp doesn’t have enough movies in the works! Look at his ‘IMDB’ profile!]

Comparing the two actors, Leonardo DiCaprio has obviously done very well pulling off ‘period piece’ characters. Leo’s characters in Gangs of New York, The Aviator, The Departed and Catch Me If You Can, display his ability to take his look back in time. Leonardo also has light eyes. His eye color is a light green with blue hints. So, not completely blue like Sinatra’s.

In Johnny Depp’s new film “Public Enemies,” Johnny plays legendary gangster ‘John Dillinger’ and pulls off the Sinatra look A+! As for having blue eyes like Sinatra, Johnny Depp’s eye color is brown, not blue. A few of the many Johnny Depp ‘period piece’ movie credits are From Hell, Chocolat, Sleepy Hollow, The Ninth Gate, Ed Wood and Cry Baby. So, we know Johnny can do this too!

This will be a hard one to call. Who do you think best suits Sinatra?