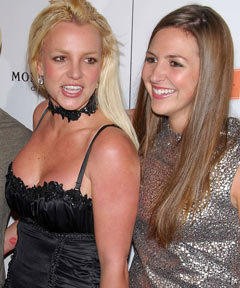 Britney Spears’ cousin Alli Sims tells Reveal mag, “Britney would always say, ‘Maybe I just want to be a teacher, I just want to do something on a ‘normal’ level. I’ve been something big for so long.'”

Alli also talked about Britney’s former breakdown and said it wasn’t as bad as people thought…
“It seemed a lot crazier than it really was because it made simple things just like going to Starbucks seem so out of hand. It was insane because of the paparazzi, but it really wasn’t that bad when you were sitting there going through it personally. I just thought it was interesting how people expected us to stay home and not go anywhere… It’s not her fault she has that many people following her around.”

Alli, who recently released her new single, “Driving Blind,” says Britney was an inspiration for her.

“She’s definitely one of the reasons why I recorded it… She was one of my very close friends. I do miss her a lot.” [Was? Were friends? Cousinz ain’t hangin’ no mo’? Maybe Britney’s Dad Jamie nixed another bad seed?]

NEW REPORTS EXPLAIN WHY BRITNEY AND ALLI’S RELATIONSHIP IS PAST TENSE: “JAMIE SPEARS TOLD ALLI TO STAY AWAY FROM BRITNEY.”

Alli claims she’s been ‘warned [by Jamie] to keep her distance from her own cousin Britney’. Daddy Jamie has had conservatorship (control) over Britney’s finances, well-being and life  since she was hospitalized in January 2008. Was Alli, a Spears’ bloodline, a culprit of Britney’s now locked away and haunted past? Jamie is making sure Britney stays on a serious and clean track.

Alli talks about Jamie’s control over Britney to Nowmagazine.co.uk:
“I was told that if I picked up the phone when she called or if I called back, then I’d have to deal with the lawyers.”

“So I decided to back away, I really didn’t have a choice. I don’t have the funds to fight it.”

“I had to take myself out of the situation until she’s in control of her own life again.”

“I feel bad for her because I’m sure she probably thinks that in a way I abandoned her.”

Okay, back to story about Alli’s singing career and ‘Britney wanting to be normal’.

Although many Britney fans claim Alli is using Britney’s name to gain fame and a career, the “Driving Blind” singer says otherwise.

Alli thinks back…
“I was sitting with her in the living room… and a song I’d done in high school popped up [on the computer] and she was like, ‘I love this song. Who’s singing it?’ And I go, ‘I am, actually.’ She goes, ‘You’re still living with me. I’m getting another assistant to help me out and you’re pursuing this.'”

Alli continued to say she feels being associated with Britney had both positive and negative effects on her life.

“I think it’s a kind of like a double-edged sword. Think it helped in a lot of ways because people did know who I was because I was around her, but it’s also been hard because people expect so much from you — you definitely have to prove yourself with everyone… there’s a lot more eyes on me.”