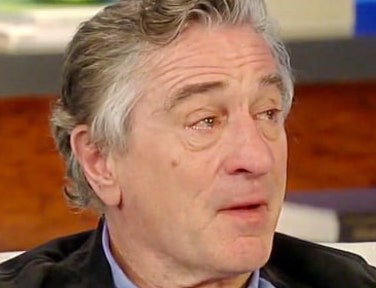 As long as I can remember, I have loved Robert DeNiro. Certainly, most of his films weren’t appropriate for me to watch as a child, but my dad enjoyed his films and I’d therefore often see him on TV even before I came to appreciate his movies on my own. And in fact, my dad is one of the reasons I loved DeNiro — the actor looks just like my father, who descended from the gritty streets of Philadelphia and spent 22 years serving in the Navy. The characters DeNiro played, such as the Navy Master Chief Billy Sunday in Men of Honor, often reminded me of my dad. It’s no coincidence that one my favorite of DeNiro’s films, the deeply personal Silver Linings Playbook features him as the father of an adult with a mental illness not unlike my own diagnosed condition. But today, Robert DeNiro broke my heart. So many of his past films subtly raised awareness about important social issues, especially concerning mental health, and today he has destroyed that legacy by choosing to feature a film that will only bring great harm to millions of families, a film that harms public understanding of autism and autistic people by misleading the public about vaccines. The Tribeca Film Festival, cofounded by DeNiro, will be screening the anti-vaccine “documentary” Vaxxed: From Cover-Up to Catastrophe, a film made by Andrew Wakefield, the disgraced gastroenterologist whofraudulently attempted to link autism to vaccines and became the father of the modern-day anti-vaccine movement. Wakefield, who lost his medical license and was officially sanctioned for doctored results in his now-retracted study, has played a major role in the fear that led vaccination rates to drop, thereby bringing back diseases in outbreaks such as the Disneyland measles outbreak last year. And now Robert DeNiro is giving this man a platform — a platform to promote a narrative that has harmed and will continue to harm autistic children and the thousands of children denied vaccines by their parents out of misguided fear. The film discusses a supposed “CDC cover-up” revealed by a “whistleblower” that purports to show a link between autism and vaccines. No such link exists. It never has. This extensive overview of the situation tells you everything you need to know about the cover-up-that-isn’t. h/t forbes

BuzzFeed reported, De Niro is standing by his decision to screen a film that distorts the scientific evidence and misinforms the public about autism and vaccines:

“Grace and I have a child with autism and we believe it is critical that all of the issues surrounding the causes of autism be openly discussed and examined. In the 15 years since the Tribeca Film Festival was founded, I have never asked for a film to be screened or gotten involved in the programming. However this is very personal to me and my family and I want there to be a discussion, which is why we will be screening Vaxxed. I am not personally endorsing the film, nor am I anti-vaccination; I am only providing the opportunity for a conversation around the issue.”