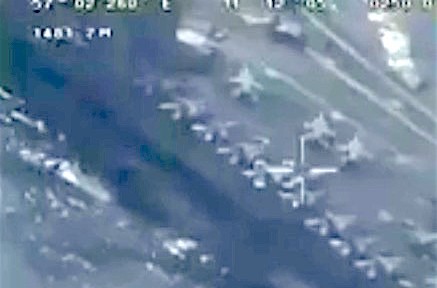 Crew members of French carrier, Charles de Gaulle spotted the drone flying over their vessel and the USS Harry S. Truman who are were engaged in a joint exercise earlier this month. According to 5th Fleet spokesman Cmdr. Kevin Stephens, the unknown and unarmed UAV approached the two carriers on Jan. 12 operating in the Persian Gulf when it was spotted by the crew of the Charles de Gaulle. “The UAV then flew towards USS Harry S. Truman. Both Charles de Gaulle and Harry S. Truman were operating in international waters in the [Persian] Gulf at the time,” read the statement. “A U.S. Navy helicopter launched from Harry S. Truman also visually identified the Iranian UAV and determined that it was unarmed.” h/t usni

Since the UAV was unarmed and Truman wasn’t conducting flight operations, the crew determined the UAV posed no danger – though the UAV flew directly over the carrier. “We determined that while the Iranian UAV’s actions posed no danger to the ship, it was however, abnormal and unprofessional,” read the statement.

In addition, Iran released video claiming to be footage from the flyover.