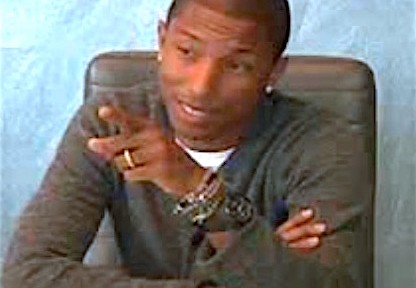 Here’s highlights from Pharrell Williams‘ deposition video taken as testimony for an infringement lawsuit leveled by the family of the late Marvin Gaye over their assertion the mega-producer and singer, Robin Thicke, knowingly violated copyright laws.

In March, a federal jury found Williams and Thicke liable for infringement to the tune of $5 million. The case is currently headed toward an appeal. THR has obtained video of the Williams and Thicke depositions. Below, watch excerpts of Williams’ contentious back-and-forth with Gaye attorney Richard Busch, in which the well-known singer-producer is challenged over whether he can read music and how much of “Blurred Lines” he wrote for Thicke. It’s compelling video.

“I did not go in the studio with the intention of making anything feel like, or to sound like, Marvin Gaye,” Williams said during the deposition. The attorney further questioned the singer, “When you were creating ‘Blurred Lines,’ were you trying to pretend that you were Marvin Gaye?” Williams replied: “At that particular time, no. But as I look back, I feel that feeling.”

When asked to define a chord structure during the deposition, Williams said (in the above video), “I’m not here to teach you music” and stated multiple times in response to questions, “I’m not comfortable.”