Most Powerful Hurricane Ever Recorded About To Hit Mexico 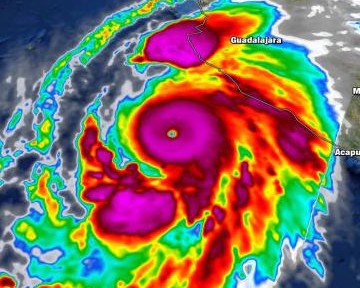 The most powerful hurricane ever recorded is about to slam square into Mexico’s beautiful coastline. Hurricane Patricia is expected to make landfall sometime this afternoon.

The storm is packing 200 mph winds with gusts clocking in at a staggering 250 mph. Locals and tourists alike along Mexico’s Pacific coast are bracing for the potentially catastrophic landfall of Hurricane Patricia predicted late in the afternoon or early in the evening on Friday. The storm rapidly intensified overnight Thursday, catching many off guard early Friday when it became the most powerful hurricane on record. In just 30 hours, the storm went from having maximum sustained winds of 60 mph to winds of 200 mph. The areas from the popular beach resort of Puerto Vallarta and the port of Manzanillo stand right in the hurricane’s path. Those in the area are making last minute moves to evacuate the area and head for higher ground. mashable

Our thoughts and prayers are with Mexico at this difficult time.