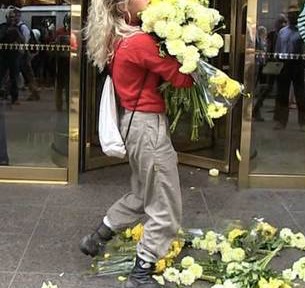 Estefani Mercedes, a woman aiming to teach Donald Trump a thing or two by delivering him a huge batch of yellow Mexican dahlias, failed in a way that can only be described as pure comedy. Estefani Mercedes struggled with her massive bouquet as she tried to navigate the revolving door at Trump Tower in NYC. She was carrying 1,000 flowers, each with a note from a Latino immigrant sarcastically thanking Trump for his views on immigration.

LUCY! You got some splaining’ to do!