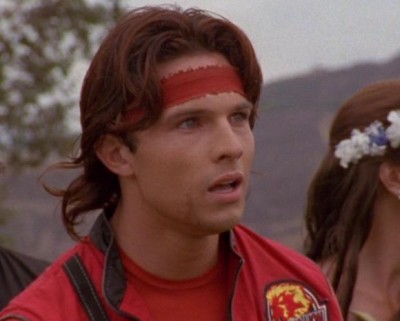 Ricardo Medina, 36, was arrested and booked into LA County jail for murder, deputies said. He played the Red Power Ranger, a deputy said. Medina and his roommate, Joshua Sutter, also 36, allegedly got into an argument that turned physical at their home in the 38000 block of San Francisquito Canyon Road, deputies said. Sutter was stabbed to death at about 3:45 p.m., deputies said, after Medina and his girlfriend went into his bedroom and closed the door. But Sutter, forced the bedroom door open, deputies said. Medina then allegedly stabbed Sutter once in the abdomen with a sword, which had been kept next to the bedroom door, according to the narrative from the sheriff’s office. h/t kwwl

After Sutter collapsed, Medina called 911, stayed at the scene and was arrested there, deputies said. He was booked on suspicion of murder at the sheriff’s Palmdale station, and held in lieu of $1 million bail, deputies said.