Dennis Rodman: I Got The Hostage RELEASED!

Colorful, former NBA star, Dennis Rodman says he is the one that got American hostage Kenneth Bae released from North Korea.

Rodman says he begged Kim Jong Un for the Bae’s release and he even showed proof. 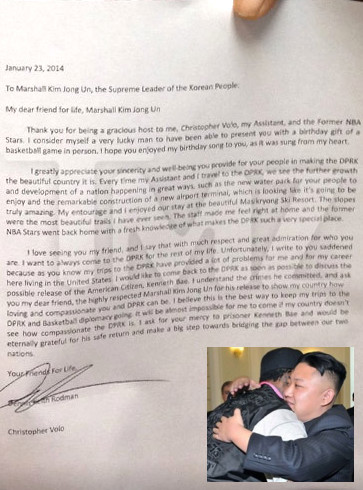 Rodman claims he sent a letter to the dictator back in January after returning home from the DPRK … pleading with Un to let Bae return home so the Worm could go back to North Korea without getting bashed. In the letter, Dennis states, “I understand the crimes [Bae] committed, and ask you my dear friend, the highly respected Marshall Kim Jong Un for his release to show my country how loving and compassionate you and the DPRK can be.” Rodman continues, “I ask for your mercy to prisoner Kenneth Bae and would be eternally grateful for his safe return and make a big step towards bridging the gap between our two nations.” h/t tmz

Dennis says he never heard back after sending the letter … but the North Korean government released a video showing Bae was alive days later — and Dennis doesn’t think it was a coincidence.