UFO Spotted In NASA Photo Is The Size Of EARTH

UFOs have been spotted throughout history, but never has one rivaled the Earth in size. Now the motherships of all motherloads was spotted near the sun in a NASA photo.

NASA has not officially commented on the massive Earth-sized UFO seen in one of their own digital images, but if they do comment it will probably be something like camera error, coronal ejection, or solar flare.. 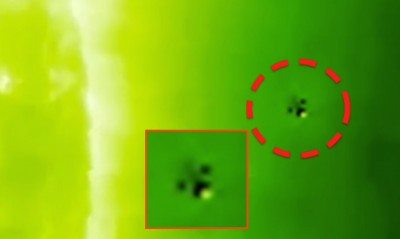 “I check out the SOHO photos every day, and was fortunate enough to catch this massive ship as it was exiting or entering the sun. This UFO is solid as you can see. It is as large as Earth itself. Look closely at the surface of it. There are no flames or heat changes. Its color does not change on its surface…unlike the sun itself which has many mixing colors. Russian scientists alerted the world over 5 years ago to the UFOs that flew around the sun in orbits that suddenly make hard right angles and changes in speed. This is one of them.”
h/t examiner

This is turning out to be a banner year for UFO sightings from all over the world. More websites and blogs are cropping up and supplying “evidence” that proves extraterrestrial life exists beyond this planet, perhaps, even beyond this galaxy.