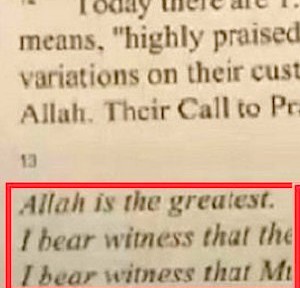 Most students in public schools struggle understanding math or basic science, but students in the oceanfront Boston suburb of Revere, Mass. are learning all about Islam — and it’s got some folks up in arms..

Part of the textbook prints the Muslim Call to Prayer..

“I bear witness that there is no God but Allah,” it says.
The textbook portion also reverently celebrates Muhammad’s life.

“Muhammad later tended sheep on the dry hills like many young Arabians,” the text explains. “Later he became a successful merchant and married a wealthy widow. However, he felt as though something was missing in his life, so he went on a retreat.” h/t whdh

The founder of Islam was “upset about the cruelty of his people,” the text also optimistically explains. They “killed baby girls.” They “treated their slaves unkindly.” And “Muhammad had a strong sense of right and wrong.”

One local parent, Anthony Giannino, is upset about the textbook’s treatment of the Muslim religion.