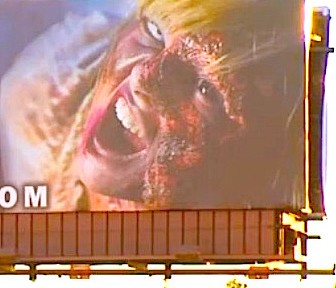 A series of highway billboards in Greensboro, N.C., promoting a popular haunted trail, Woods of Terror, is being called too violent for an Ebola weary public.

The billboard depicts a young women screaming, with blood covering her face, one of the unfortunate symptoms of Ebola. 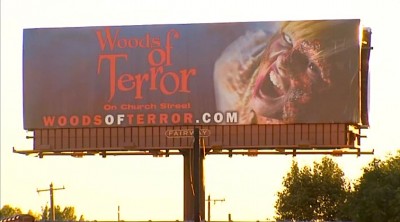 The Woods of Terror owner, Eddie McLaurin, says he understands people’s concerns but he’s in the “business of Halloween,” so the billboards will stay.

“We went through 10 [billboard] pictures and some of them were very aggressive and we didn’t want to put them out to the public because kids and people who choose not to partake of my product,” McLaurin said. “If you come here you are going to get scared. This is not for your kids under 13. We are PG-13 and I don’t want little kids to come here and ruin their Halloween but when they are teenagers and adults we have a great entertainment for them.” h/t myfox8

Some parents have even taken to Facebook groups expressing concern the billboards glamorize violence and are stoking Ebola fears.