Adrian Peterson broke his silence in the form of a religious tweet.

Peterson sent out the tweet as the Vikings were kicking off against the Patriots sans him. He didn’t mention the charges, but instead sent out a picture of highlighted religious verses. 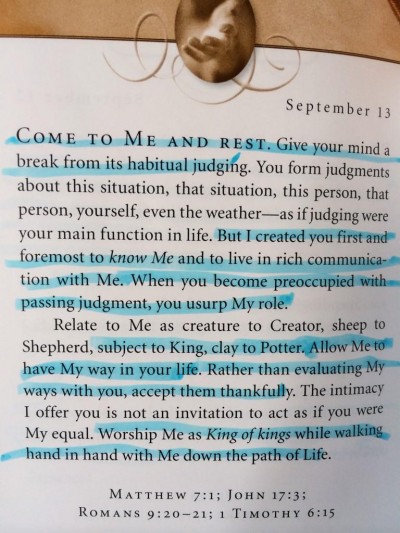 Peterson, who was indicted on a child abuse charge, was reactivated by the Vikings, clearing him to play. 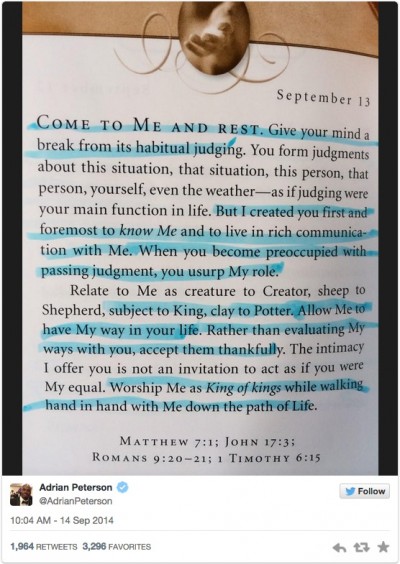 The following statement is from Vikings Owners Zygi Wilf and Mark Wilf:

Today’s decision was made after significant thought, discussion and consideration. As evidenced by our decision to deactivate Adrian from yesterday’s game, this is clearly a very important issue. On Friday, we felt it was in the best interests of the organization to step back, evaluate the situation, and not rush to judgment given the seriousness of this matter. At that time, we made the decision that we felt was best for the Vikings and all parties involved.

To be clear, we take very seriously any matter that involves the welfare of a child. At this time, however, we believe this is a matter of due process and we should allow the legal system to proceed so we can come to the most effective conclusions and then determine the appropriate course of action. This is a difficult path to navigate, and our focus is on doing the right thing. Currently we believe we are at a juncture where the most appropriate next step is to allow the judicial process to move forward.

We will continue to monitor the situation closely and support Adrian’s fulfillment of his legal responsibilities throughout this process.

My attorney has asked me not to discuss the facts of my pending case. I hope you can respect that request and help me honor it. I very much want the public to hear from me but I understand that it is not appropriate to talk about the facts in detail at this time. Nevertheless, I want everyone to understand how sorry I feel about the hurt I have brought to my child.

I never wanted to be a distraction to the Vikings organization, the Minnesota community or to my teammates. I never imagined being in a position where the world is judging my parenting skills or calling me a child abuser because of the discipline I administered to my son.

I voluntarily appeared before the grand jury several weeks ago to answer any and all questions they had. Before my grand jury appearance, I was interviewed by two different police agencies without an attorney. In each of these interviews I have said the same thing, and that is that I never ever intended to harm my son. I will say the same thing once I have my day in court.

I have to live with the fact that when I disciplined my son the way I was disciplined as a child, I caused an injury that I never intended or thought would happen. I know that many people disagree with the way I disciplined my child. I also understand after meeting with a psychologist that there are other alternative ways of disciplining a child that may be more appropriate.

I have learned a lot and have had to reevaluate how I discipline my son going forward. But deep in my heart I have always believed I could have been one of those kids that was lost in the streets without the discipline instilled in me by my parents and other relatives. I have always believed that the way my parents disciplined me has a great deal to do with the success I have enjoyed as a man. I love my son and I will continue to become a better parent and learn from any mistakes I ever make.

I am not a perfect son. I am not a perfect husband. I am not a perfect parent, but I am, without a doubt, not a child abuser. I am someone that disciplined his child and did not intend to cause him any injury. No one can understand the hurt that I feel for my son and for the harm I caused him. My goal is always to teach my son right from wrong and that’s what I tried to do that day.

I accept the fact that people feel very strongly about this issue and what they think about my conduct. Regardless of what others think, however, I love my son very much and I will continue to try to become a better father and person.