Adrian Peterson, on the heels of his indictment for beating a child, is being accused by another babymama of also beating her four-year-old son.

In text messages airing on local news, Peterson tells the mother that the boy, 4, received the beating because he was swearing at a sibling while they were out for a drive. 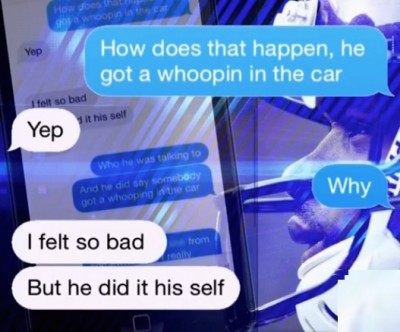 While Peterson wouldn’t tell her what he hit the boy with, he hit hard enough to leave a scar on the boy’s face—apparently due to the presence of a car seat. You can view KHOU’s full report from tonight’s 6 p.m. newscast above. The result of the Child Protective Services investigation is unclear, but charges were never filed. It’s unclear when this second incident occurred. source

After the news of this beating broke today, Peterson’s attorney, Rusty Hardin, has already issued this statement,

“The allegation of another investigation into Adrian Peterson is simply not true. This is not a new allegation, it’s one that is unsubstantiated and was shopped around to authorities in two states over a year ago and nothing came of it. An adult witness adamantly insists Adrian did nothing inappropriate with his son. There is no ongoing or new investigation.”