Guess What Kind Of MakeUp This Woman Got Caught Stealing!

A Fayetteville AK., woman donning heavy eyeshadow was arrested on suspicion of stealing $144 worth of, you guessed it, eyeshadow from the Ulta Beauty Store.

Brandy Allen, 31, was arrested and transported to the Washington County Detention Center after racking up charges including shoplifting and disorderly conduct. 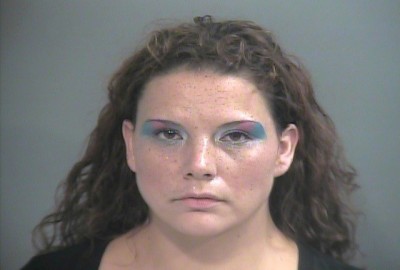 Cops were called to a business on reports of a shoplifter, according to a preliminary report. The employee said she saw observed Allen stealing makeup after an unidentified woman tried to distract them.

An officer arrived at the store and approached Allen. The original caller introduced herself to Allen as the general manager of the store and asked to see the contents of her purse, the report states. Allen fumbled through her purse for several minutes before taking out several different packages of eye shadow, and as she pulled out the items, she’d run her fingers through the tops of each one, trying to make the eyeshadow look used, according to the report. She started to curse loudly saying, “No one [expletive] saw me steal anything,” the report states. source

The officer took Allen into custody after discovering the stolen makeup which was valued at $144.

Allen’s bond was set at $830, and at 11:45 p.m. on the same day she was booked in, she bonded out of the Washington County Detention Center, according to the jail’s intake report.