Farrah Abraham’s newly released music video, BLOWIN, (her caps, not ours,) has garnered an impressive 250,000 plays in under 24 hours on Youtube, the problem is, only 1 percent of those folks actually admit to liking the video. 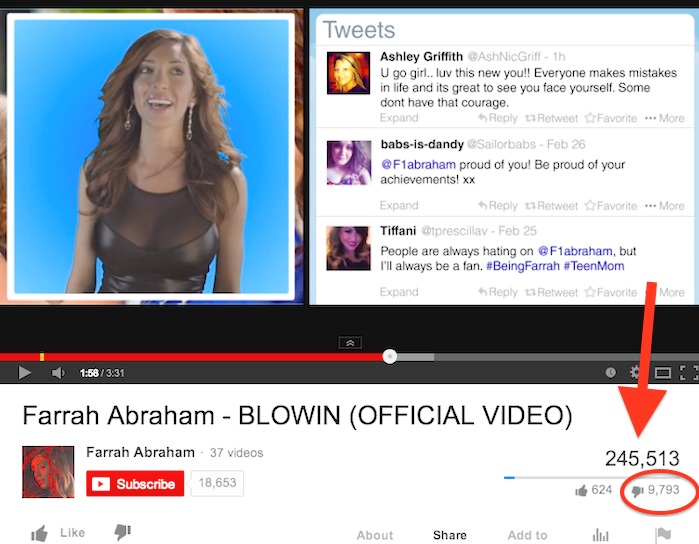 Here’s a sampling of some of the caustic comments left by “fans” on Youtube. Keep your eye out for the 1 percent.

Contessla Fiant Huerta
The most cringe-worthy part about this whole video/song isn’t the actual lyrics, the horrible auto tune, or the general cheesiness of it…It’s the fact that she is serious – she thinks she is a celebrity – she really thinks this is completely amazing. I’m really speechless at how self-absorbed she is. It’s almost scary, just like her patchwork quilt of a plastic body.

zygomats
I’m not even a “Farrah-hater” but what the heck is this. She is nowhere near being an artist let alone a singer (auto-tune much). I guess she’s just trying to get as much money in as possible, she’ll probably regret all that she’s been doing for money when she’s at a sensible age. She is so superficial, what a sell-out.

Anna Lemcke
what… no. Not sure what’s worse this, or her movies

Joshua Herington
Stick to movies cause this is just bad.

Watch the video below!

StayAtHomeDad
WHAT THE F**K DID I JUST WATCH!? Isn’t this the same girl that made that “Friday” song?!?

angela mcdown
This is probably thee worst song I have ever heard.

Michael Greco
Holy s**t, you are so f**king stupid. People hate it because it sucks and she is using her kid in video, as if her kid is some sort of marketing tool. The f**k is the matter with you. I would not be surprised if you are a “teen mom”/ slut your self!

Michael Greco
You are giving a bad name to woman, just stop defending her, lol.

One thing is for sure, the video is raking in plenty of ad revenue.