We already know that Justin Bieber blew-off Bon Jovi‘s advice, but will the young singer blow-off the advice of his mentor, Mark Wahlberg?

The thing is, Bieber cares about what Wahlberg thinks, so this could get interesting because just last year, we heard about how Biebs fancied himself the next Mark Wahlberg and wanted to do a remake of Fear. So while you read this, imagine Bieber making this face from this Instagrammed photo while he was recently backstage in Wahlberg’s native Boston: 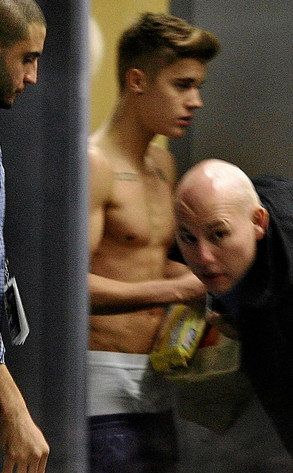 Advice to the Bieber: “Justin, are you listening? Don’t be so naughty, yeah. Be a nice boy, pull your trousers up, make your mum proud and stop smoking weed, you little b——d.”

What’s Bieber’s problem? “He’s a teenager living in a different day and age. I was in prison before I got a record out and I don’t think he’s been to prison. He’s a nice enough kid and you’re going to be a teenager. But if you’re being a teen in the spotlight you’re going to be criticised for it. This career can be short-lived — you might as well be the best you can while you’re doing it.”

Mark’s still willing to go there: “Justin and I were talking about doing a movie, which could still happen. We have a great script that could be a vehicle for him to make his debut in movies, then maybe we could do something for the soundtrack.”

Do you think this is enough of a wake up call for the Biebs? Or do you think he’ll stay on his crooked path of destruction?