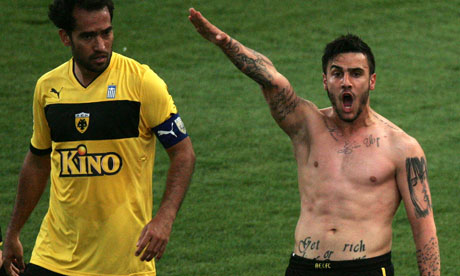 Giorgos Katidis is a midfielder for the AEK Athens team. He scored a game winning goal against Veria and in celebration he stripped his shirt and appeared to give a Nazi salute. This action has led to a lifetime ban from all the national teams from Greece’s football federation, EPO.

The player’s action to salute to spectators in a Nazi manner is a severe provocation, insults all the victims of Nazi bestiality and injures the deeply pacifist and human character of the game,” EPO said in a statement.

Katidis went to twitter to defend himself saying he was merely pointing at a fellow teammate in the stands and had no idea what the gesture signified. His coach also defends him by saying, “He most likely saw such a salute on the internet or somewhere else and did it without knowing what it means.”

See the clip and let me know what you think. I don’t know who doesn’t know what that salute signifies in this day and age. Lame excuses! Seems like the answers you would give if you were on Maury right before he reads the lie detector test results.