Yay! I just got a brand new phobia! brain tapeworms! No really! IT’S REAL! Really scary! And it happened to Singer Jay Whalley after he went to the doctor to get checked out for seizures… He posted this gnarly photo of his dreadlocked shaved and now scarred noggin making this statement on his band’s Facebook. 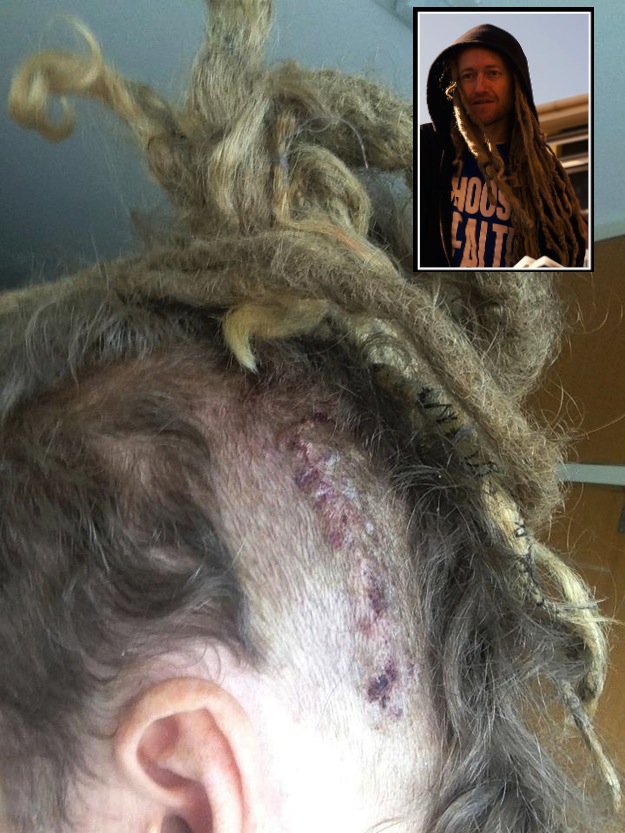 So the tapeworm eggs live in pig flesh (most common in C America but found in loads of other countries too), the pig is killed and the meat undercooked and eaten by old mate. Old mate grows a tapeworm in his intestine which eventually produces eggs. Old mate goes to el baño, doesn’t wash his hands properly then busies himself cooking my vegetarian burrito. Gross. Once in my stomach they never become tapeworms but they migrate into the muscle, most of the time causing no problem and you’ll never know it’s there, the only place you’ll have problems is if they make it to your brain or eyes. Once in the brain the body reacts by sealing it in a kind of cocoon or cyst where it quite happily lived for 4 f**king years! It’s only when it dies that the body has some kind of inflammatory response resulting in swelling which in turn lead to the seizures.

SCARRY AND GROSS! Nice combo! A little punk music for accompaniment and we’re all set for lunch.

Special thanks to Buzzfeed.