You Talking To Me? Robert De Niro Has A Real Communication Problem With Jay-Z

Robert De Niro and Jay-Z (of all people) are apparently involved in, what Page 6 is calling, a “tense beef.” It all went down at Leonardo DiCaprio‘s birthday bash the other night when De Niro apparently called Jay-Z out for not returning several of the award-winning actor’s phone calls. 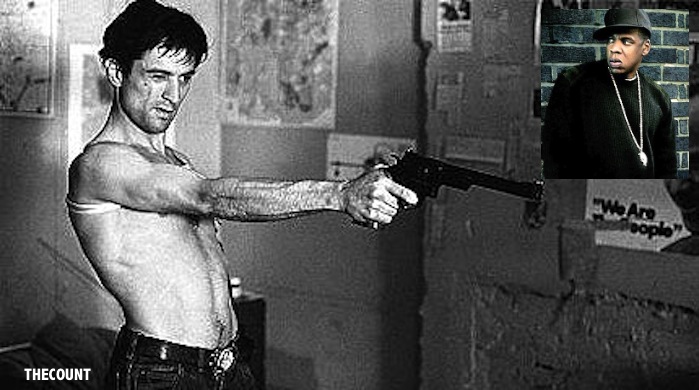 Robert De Niro and Jay-Z got into a tense beef at Leonardo DiCaprio’s birthday bash the other night, when De Niro called the rapper disrespectful, Page Six can exclusively reveal.

Spies say “Godfather II” and “Taxi Driver” star De Niro gave Jay a dressing-down in a roomful of celebs including Martin Scorsese because the rap mogul had refused to return De Niro’s calls.

Sources add that Jay tried to joke his way out of the situation, and even his wife, Beyoncé, tried to intervene, but De Niro wouldn’t back down.

“Bob was sitting at a table, and when Jay-Z went over to say hello, De Niro told Jay that he never called him back,” a source says.

A spy then overheard De Niro complaining to the rapper, a fellow TriBeCa resident, about a song Jay-Z agreed to record for the Tribeca Film Festival. De Niro had reached out to discuss further details, but Jay never returned his calls.

“Bob wasn’t in any mood to make polite conversation,” the spy says. “He told Jay that if somebody calls you six times, you call them back. It doesn’t matter who you are, that is just rude.”

When Jay-Z tried to make a joke of it, saying he is terrible on the phone, a source says, “De Niro kept telling him that he thinks he’s the man, but that he was disrespectful.’ ”

“Beyoncé came over, but that didn’t calm Bob down,” the source said, adding that afterward, “It was the talk of the party. Everyone was saying there’s only one star in New York bigger and badder than Jay-Z, and that’s Robert De Niro. He can be quite scary when he’s angry.”

But a source close to De Niro told us, “It was a low-key private conversation between two people that was apparently overheard. It was not a heated discussion.”

Ironically, Jay-Z paid homage to the Oscar winner in the second line of his 2009 hit “Empire State of Mind.” (“Yea I’m out that Brooklyn, now I’m down in Tribeca/Right next to De Niro, but I’ll be hood forever.”)

The Darby bash, which sources say ended at 5 a.m. with a tab of nearly $3 million, much of which went to the Leonardo DiCaprio Foundation, drew Cameron Diaz, Jamie Foxx, Chris Rock, Jonah Hill, Edward Norton, Mark Ruffalo and Emma Watson.