The New York Times pulled no punches in describing every loathed element of Fieri’s establishment. There is no way on earth I can even begin to describe to you how much this reviewer hated Fieri’s restaurant, so I’ll just let you read the disgust for yourself… 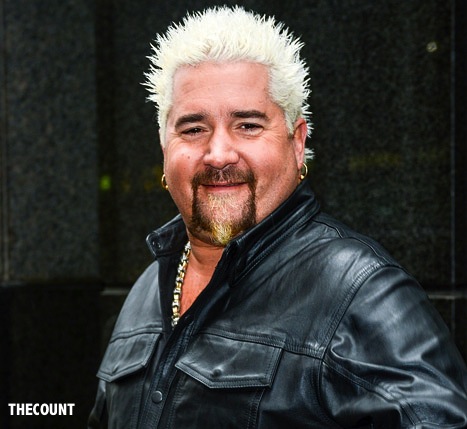 TRENDING: You Talking To Me? Robert De Niro Has A Real Communication Problem With Jay-Z
CLICK PHOTOS TO SEE MORE
POST NOWTWEET NOW

Slide Show
Guy’s American Kitchen & Bar
Related in Opinion
Room for Debate: Do We Need Professional Critics? (October 7, 2012)
Readers’ Comments
“Guy Fieri is a pox on professional chefs. I think the Donkey Sauce may be seasoned with the tears of Gordon Ramsay and Anthony Bourdain. ”
Red, Minnesota
Read Full Comment »
Post a Comment »
Did panic grip your soul as you stared into the whirling hypno wheel of the menu, where adjectives and nouns spin in a crazy vortex? When you saw the burger described as “Guy’s Pat LaFrieda custom blend, all-natural Creekstone Farm Black Angus beef patty, LTOP (lettuce, tomato, onion + pickle), SMC (super-melty-cheese) and a slathering of Donkey Sauce on garlic-buttered brioche,” did your mind touch the void for a minute?

Did you notice that the menu was an unreliable predictor of what actually came to the table? Were the “bourbon butter crunch chips” missing from your Almond Joy cocktail, too? Was your deep-fried “boulder” of ice cream the size of a standard scoop?

What exactly about a small salad with four or five miniature croutons makes Guy’s Famous Big Bite Caesar (a) big (b) famous or (c) Guy’s, in any meaningful sense?

Were you struck by how very far from awesome the Awesome Pretzel Chicken Tenders are? If you hadn’t come up with the recipe yourself, would you ever guess that the shiny tissue of breading that exudes grease onto the plate contains either pretzels or smoked almonds? Did you discern any buttermilk or brine in the white meat, or did you think it tasted like chewy air?

Why is one of the few things on your menu that can be eaten without fear or regret — a lunch-only sandwich of chopped soy-glazed pork with coleslaw and cucumbers — called a Roasted Pork Bahn Mi, when it resembles that item about as much as you resemble Emily Dickinson?

When you have a second, Mr. Fieri, would you see what happened to the black bean and roasted squash soup we ordered?

Hey, did you try that blue drink, the one that glows like nuclear waste? The watermelon margarita? Any idea why it tastes like some combination of radiator fluid and formaldehyde?

At your five Johnny Garlic’s restaurants in California, if servers arrive with main courses and find that the appetizers haven’t been cleared yet, do they try to find space for the new plates next to the dirty ones? Or does that just happen in Times Square, where people are used to crowding?

If a customer shows up with a reservation at one of your two Tex Wasabi’s outlets, and the rest of the party has already been seated, does the host say, “Why don’t you have a look around and see if you can find them?” and point in the general direction of about 200 seats?

What is going on at this new restaurant of yours, really?

Has anyone ever told you that your high-wattage passion for no-collar American food makes you television’s answer to Calvin Trillin, if Mr. Trillin bleached his hair, drove a Camaro and drank Boozy Creamsicles? When you cruise around the country for your show “Diners, Drive-Ins and Dives,” rasping out slangy odes to the unfancy places where Americans like to get down and greasy, do you really mean it?

Or is it all an act? Is that why the kind of cooking you celebrate on television is treated with so little respect at Guy’s American Kitchen & Bar?

How, for example, did Rhode Island’s supremely unhealthy and awesomely good fried calamari — dressed with garlic butter and pickled hot peppers — end up in your restaurant as a plate of pale, unsalted squid rings next to a dish of sweet mayonnaise with a distant rumor of spice?

How did Louisiana’s blackened, Cajun-spiced treatment turn into the ghostly nubs of unblackened, unspiced white meat in your Cajun Chicken Alfredo?

How did nachos, one of the hardest dishes in the American canon to mess up, turn out so deeply unlovable? Why augment tortilla chips with fried lasagna noodles that taste like nothing except oil? Why not bury those chips under a properly hot and filling layer of melted cheese and jalapeños instead of dribbling them with thin needles of pepperoni and cold gray clots of ground turkey?

By the way, would you let our server know that when we asked for chai, he brought us a cup of hot water?

When you hung that sign by the entrance that says, WELCOME TO FLAVOR TOWN!, were you just messing with our heads?

Does this make it sound as if everything at Guy’s American Kitchen & Bar is inedible? I didn’t say that, did I?

Tell me, though, why does your kitchen sabotage even its more appealing main courses with ruinous sides and sauces? Why stifle a pretty good bison meatloaf in a sugary brown glaze with no undertow of acid or spice? Why send a serviceable herb-stuffed rotisserie chicken to the table in the company of your insipid Rice-a-Roni variant?

Why undermine a big fist of slow-roasted pork shank, which might fly in many downtown restaurants if the General Tso’s-style sauce were a notch less sweet, with randomly shaped scraps of carrot that combine a tough, nearly raw crunch with the deadened, overcooked taste of school cafeteria vegetables?

Is this how you roll in Flavor Town?

Somewhere within the yawning, three-level interior of Guy’s American Kitchen & Bar, is there a long refrigerated tunnel that servers have to pass through to make sure that the French fries, already limp and oil-sogged, are also served cold?

What accounts for the vast difference between the Donkey Sauce recipe you’ve published and the Donkey Sauce in your restaurant? Why has the hearty, rustic appeal of roasted-garlic mayonnaise been replaced by something that tastes like Miracle Whip with minced raw garlic?

And when we hear the words Donkey Sauce, which part of the donkey are we supposed to think about?

Is the entire restaurant a very expensive piece of conceptual art? Is the shapeless, structureless baked alaska that droops and slumps and collapses while you eat it, or don’t eat it, supposed to be a representation in sugar and eggs of the experience of going insane?

Did you finish that blue drink?

Oh, and we never got our Vegas fries; would you mind telling the kitchen that we don’t need them?

SERVICE The well-meaning staff seems to realize that this is not a real restaurant.

SOUND LEVEL Rawk and roll, but at moderate volumes.

DRINKS AND WINE Margaritas, while too sweet and strong, are the best cocktails. Draft beers are better than the largely dull wines.

WHEELCHAIR ACCESS The bar area and an accessible restroom are on street level.

WHAT THE STARS MEAN Ratings range from zero to four stars and reflect the reviewer’s reaction primarily to food, with ambience, service and price taken into consideration.