Actor Shia LaBeouf has completely bitten off the hand that fed him animal crackers as a child! 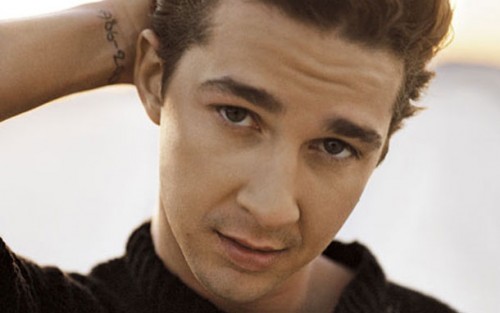 The child star turned adult star, is complaining about a subject that might make you want to ring his cute little fortunate neck.

LaBeouf is no doubt one of the best young actors on the big screen, and ironically, he doesn’t want to be an actor on the ‘big screen’…

LaBeouf is so spoiled, that he says he done with acting in ‘big’ Hollywood blockbusters, and wants to act in smaller or indie films instead. LaBeouf says that there is no room for creativity in the Hollywood movie machine, so that’s why he wants to jump into indies only from now on- so he can have more freedom.

LaBeouf is notorious for dropping shock bombs like this, but really? Is he really ready to close the books and quit starring in Hollywood pictures? 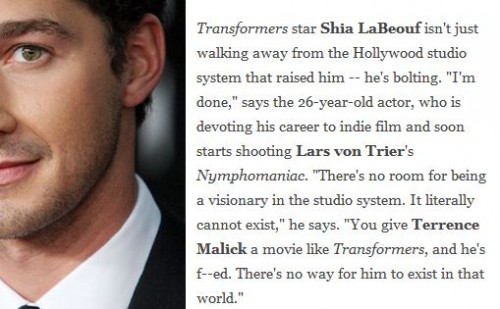 He confirmed the hoopla to Hollywood Reporter, telling the magazine, “Im done [with Hollywood]. There’s no room for being a visionary in the studio system. It literally cannot exist,” he said. In the interview, LaBeouf also briefly mentioned the weird side of Hollywood, how a ‘rep constantly watches over you’ as soon as you sign on for a film. He also praised indie filmmaker ‘dudes’, and explained how they don’t have a third eye on you at all times saying, “These dudes are a miracle. They give you the money, and they trust you — [unlike the studios, which] give you the money, then get on a plane and come to the set and stick a finger up your ass and chase you around for five months.”

Well this is great news for other young aspiring actors! Now they have a chance in Hollywood since he is leaving. This is also great for indie filmmakers, because now they can be hopeful about approaching him with their scripts.