The 5th annual Fantasy 500 Race Party was held Saturday night in Indy, put on by Image First Marketing and Events co-owned by Bryan Schmidt of Indianapolis. It was presented by Tag Heuer and Digigraph in the Emmis Building on Monument Circle in downtown Indianapolis. 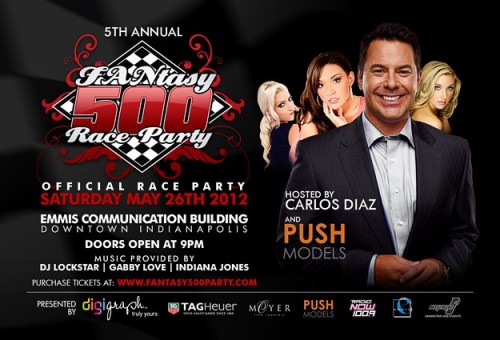 The FANtasy 500 Race Party has established itself as the premier event to do during the Indy 500 Weekend. Since its inception in 2008, it has quickly became a huge hit with more than 1,000 guests each year entering through the doors at the sold-out event.

This year, Entertainment News Host Carlos Diaz hosted the party. DJ Lockstar and DJ Indiana Jones spun tunes inside, and DJ Gabby Love spun just outside at the entrance of the party, syncing her beats up with a live drummer.

Ladies from PUSH Models greeted guests on the red carpet and took pictures with them. Also on the red carpet, Real Scene TV’s Margaret Medley interviewed people for their local Indy TV show.

Inside the party on the main floor, cheeky Gogo dancers were working their poles, reeling the gentlemen onto the dance floor area- keeping the party on its’ toes.

There was an open bar in the VIP section that was upstairs, where guests got to hang out by a balcony that oversaw the party below. Diaz was photographed hanging out up in VIP, leaning over the balcony with a few friends- laughing, drinking… having a great time. Hors d’oeuvres were also being served upstairs, as well as free shots of Jagermeister.

Well-dressed ladies and gentlemen all seemed to be having a great time as they were chatting, drinking and dancing. For the 5th time, some of the finest people in Indy all showed up in one place on race weekend, reminding us that the annual Fantasy party a will be a definite staple for years to come.

If you didn’t make it this year, you can check out the pictures (below) from the party, and fantasize about going next year! In the meantime, ‘Friend’ “Image First LLC” on Facebook to get the notification.