Some British kids got the surprise of their young lives after finding their beloved hamster, “Smurf” stuck, in midair, to his metal cage. At first the kids thought Smurf had somehow managed to impale himself on one of the cage’s metal bars, but on closer inspection, Smurf was not bleeding.

It was mom who spotted the outline of a circular object protruding from the Smurf’s body and soon the family concluded Smurf must have eaten a magnet off of a spiderman action figure and then become attached to the metal cage. 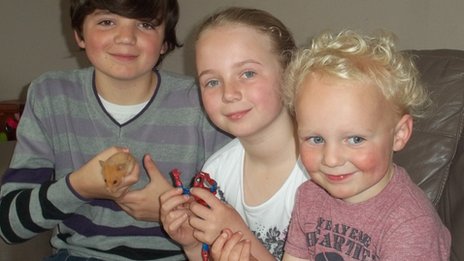 Mom said: “We’d been out for the day and got back in the late afternoon and popped into Tom’s bedroom, we found the hamster in mid air and stuck to the bars. It looked quite gruesome initially. We couldn’t work out how it had happened and Smurf was in a quite a tangle. It was then that I saw the outline of something on her cheek that turned out to be the magnet from George’s Spiderman toy.”

Smurf survived and according to the magnetic family is “now back to her normal loopy self.”