Before award season comes to an unofficial end tonight with the Oscars, another Hollywood tradition took place devoid of stars, fancy dresses or even stars. It’s the guilty pleasure known as the Razzies.

“The Last Airbender” took home the Razzie for Worst Picture on it’s way to leading Saturday’s Razzies with a total of five awards including worst director and worst screenplay for M. Night Shyamalan. Praise for film was non-existent from the show’s founder John Wilson. “He’s managed to take a cartoon property and make it even less lifelike by making it with real actors, ” said Wilson. “Most people who like the show, and this would include my 14-year-old son, hated the movie. It made no sense whatsoever.”

The mockery of the Academy Awards which takes place the night before the Oscars celebrates Hollywood’s most skewered cinematic uh…achievements. This year was no different as nominees once again lacked the courage of last year’s winner Sandra Bullock in showing up to accept the award.

Rounding out the top honors: Ashton Kutcher was voted as worst actor for not only “Killers”, but also “Valentine’s Day”. Jessica Alba cleaned house for worst actress in four 2010 films including “The Killer Inside Me”, “Little Fockers”, “Machete” and Valentine’s Day.”

So what about Worst Actress, you may ask? Well, that honor went to the stars of “Sex and the City 2″. I’m assuming Sarah Jessica Parker, Kim Cattrall, kristin Davis and Cynthia Nixon’s invites were lost in the mail. Wilson wasn’t short in explaining why they deserved the prize.

“It was released in the middle of a period of American history when everyone’s scrounging not to lose their homes, and these women are riding around in Rolls-Royces, buying expensive shoes and just throwing money around like they’re drunk, ” said Wilson.
Want more entertainment news and reviews, follow me on twitter: @lamoviedude

Youtube stars are really cashing in these days! Double Rainbow guy, Bed Intruder Antoine Dodson, Leeroy Jenkins, Numa Numa guy, Boom Goes the Dynamite and Freakout Kid are all set to appear together in a film called “The Chronicles of Rick Roll”.

The new commercial for the ‘truth or dare’ style Wii game “We Dare”, is one of the most risqué commercials I’ve ever seen for a video game or any commercial really. I don’t mean to sound like a prudish parent, but you’ll probably agree when you see the group of actors trading off the spanking position on each others’ laps!

Apparently, there were a few different versions of this commercial- like alternate endings, that being one where the couples ‘switch off’ at the end, and imply that they are going to go ‘do their thing’ when they leave the room. Another alternate ending showed the the entire group having at it, but those commercials got scrapped, leaving us just with this raunchy one!

Surprisingly, the game states that you have to be “12+” to play the game! A spokeswoman for French makers Ubisoft said: “We Dare is intended for an adult audience.” She said the age rating was set by an independent European panel. Okay, so 12 year-olds in Europe are really like American 18 year-olds?

Anyway, the 12+ thing really seems to go out the window at the very end of the commercial because the graphics state: “ENTER PARENTAL CODE 6969″… implying that it’s for adults, especially with the corny “6969″ choice of numbers.

Okay IGN/Wii… you got our attention, but we don’t want the game because it’s unsanitary!

Investigators said the ID card the woman showed the man via Internet, was a sample driver’s license from Florida, and they had to break it to the guy that his Internet girlfriend was fake. They said the poor man “was in disbelief” when they told him the woman was not real, police said.
END_OF_DOCUMENT_TOKEN_TO_BE_REPLACED

A shocking new business is opening up in Sacramento, CA, and it’s going to be a hot tourist destination like Disneyland! It’s going to be like a huge Wal-mart, but it will be a ‘weed-mart’. This “Wal-Mart of Weed” store, which is what Sacramento locals are calling it, is actually named “weGrow” and it is a “hydroponics warehouse”.

This 10,000 square feet building is going to be full of medical pot products, but they will not be selling any actual pot. “It’s just here for display, but nothing in here blooms,” said the owner Mike Garcia. It’s just for decoration but you can’t smoke it?! Hmmm…maybe this won’t be the next Disneyland…

Garcia says it’ll be the biggest business of its kind in northern California. He said the store offers “the different levels of how to grow your medical cannabis,” from fertilizer to getting the finished products, and everything in-between. “We believe this is gonna have a tremendous economic impact on Sacramento.”

The owners said they want to have a ‘positive’ impact on the community too. For their grand opening on Saturday, they invited town officials like elected leaders, the Sheriffs department, and even the Fire Department, making it one happy party! I envision eyebrows raising!
In coming months, weGrow plans to open stores in Arizona, Colorado, New Jersey and Oregon. The enterprise started in Oakland last year as a warehouse store called iGrow. 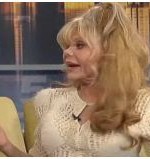 “The voice is gifted because she is so powerful with the voice…but why does she have to remind people of Madonna? Why don’t she go her own self? I never copy nobody.”

“I was me and I created something that was me. I can not feel comfortable being a copy of other people.”
END_OF_DOCUMENT_TOKEN_TO_BE_REPLACED

Los Angelenos are so forward thinking and by the number of cars, so forward moving that the city’s history is often confined to museum tributes and public television. However, today Los Angeles marks a major historical landmark that most may not have a clue about and it involves aliens.

On February 25th, just after 2 am, unidentified flying objects appeared in the sky over Los Angeles. The country was already at war and the threat was taken seriously. Air raid sirens blared as a total blackout was ordered. At 3:16 am, the 37th Coast Artillery Brigade fired over 1,400 anti-aircraft shells at the flying objects over the next hour to no avail. Not a single shell managed to touch the aircraft. Eyewitnesses swore that it wasnt a plane nor a balloon. It was quickly proved that they weren’t the initially suspected Japanese bombers. According to eyewitnesses, the objects floated, glided and General George C. Marshall in his initial memo to President Roosevelt claimed the “unidentified airplanes….[traveled at speeds ranging from] ‘very slow’ to as much as 200 mph from elevations of 9000 to 18,000 feet”.

The aircraft migrated south from Santa Monica to Long Beach. Reports on the number of craft varies from 9 to 25, but what wasn’t in dispute is their existence. Although according to the Los Angeles Times (February 26th, 1942) Secretary of the Navy, Frank Knox tried to dismiss the event as a “false alarm” due to “jittery nerves” of a populace on edge by war, the press and the public were persistent. The next day, Secretary of War Henry Stinson not only confirmed that the craft was real, but so was the ensuing battle. This culminated in Santa Monica’s US Representative Leland Ford calling for a congressional investigation, which unfortunately got buried. Since then, various theories have said the aircraft were weather baloons to blimps to German aircraft launced from secret bases in Mexico. UFO theorists and witness accounts give 1400 reasons (see above) why those theories don’t hold water.

During a press conference to celebrate this anniversary as well as promote Columbia’s upcoming film Battle: L.A, a panel of UFO experts and retired military personnel gathered to discuss this event as well as other UFO encounters witnessed by the military. What made this gathering unique is that it didn’t so much deal with tabloid accounts of body probes and flying cows, but how the military has documented contact with UFOs.

Capt. Robert Salas and Lt. Col. Charles Halt spoke about their own UFO encounters that featured, among many things, the neutralizing of nuclear weapons and electronic communications where they were stationed. William Birnes, publisher and creator of UFO Magazine and Mark Easter of the Mutual UFO Network were also on hand to explain a history of UFO encounters as well as to petition the government for full disclosure on any and all UFO contact.

In “Battle:LA”, starring Aaron Eckhart, Earth is attacked by aliens and it’s up to a Marine Staff Sergeant (Aaron Eckhart) and his brave platoon to make a final stand against an invading alien force.

Sony is going all out in promoting their upcoming film Battle: Los Angeles. They’re teaming up with Amazon in offering a chance to see the movie for free.

Without going all Groupon here, if you purchase a selected Sony Blu-Ray DVD, you’ll get a promotional code that’s good for a free admission to see Battle: LA or for a free concession item. You have 24 selected movies to choose from. Now, before you think you’ll get stuck with the director’s cut of Weekend at Bernie’s 5 or some movie that costs $50, think again. Some of the titles that you can get under $12 are “District 9″, “Ghostbusters”, ”Close Encounters”, “Air Force One” and “Hancock” and the Spider-Man movies are just $14.99.

Battle: Los Angeles opens nationwide on March 11. If you don’t like opening night crowds, that’s fine, too. The promotional codes are good from March 11 to June 1, 2011 at participating theaters.To find out more about the promotion, click here.

Thanks to the guys at Mediatakeout.com for these newly released Rihanna photos shot by the hospital in 2009 after she took a bad beating from then boyfriend Chris Brown. The release of the pictures come just as Brown’s restraining order levied by Rihanna was eased by the courts.