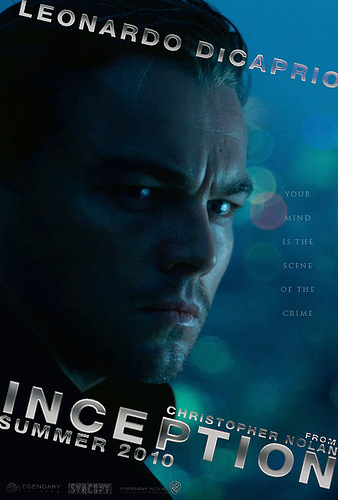 4 1/2 Stars out of 5Note: NO spoilers through entire story!
I saw “Inception” last night at the IMAX, which stars Leonardo DiCaprio. I’m a big Leo fan, not just because he’s really really ridiculously good looking, but he’s a nice dude in real life and he’s an amazing actor. How can you not like the guy?! We all loved Titanic, The Aviator, The Departed, The Beach, Revolutionary Road and Shutter Island-just to name a few of his killer movies.

It was a very unique choice to cast all of these actors for the film, and they all turned out to be great on screen together and I’m glad that it wasn’t the same old formula, the casting director took a risky jump.

You are probably skeptical about heading to the theater since seeing the movie previews of Leonardo DiCaprio paired up with “Juno” star Ellen Page, but the chemistry does match and their roles flow together nicely in the movie (I’m being vague so I don’t give away any spoilers!).

I want to point out that actor Joseph Gordon-Levitt, who plays alongside Leo in the movie, finally got to play a grown-up role! I was skeptical of his acting in this movie because all the work I’ve always seen of him seems to be immature and kind of shallow (“500 Days of Summer” starring Zooey Deschanel). Sorry! I just think he’s been typecast for so many years as this desperate-loser-guy, and I was beginning to think he was a crappy actor. Inception changed my thinking, and now he has finally broken out of the young-dorky roles. I’m really excited for his career now! He’s looking up, and looking hotter than ever.

If you’re a vivid dreamer and if you’re into dream interpretation, this movie is for you!
Inception was about this group of ‘dream worker’ people who get offered a challenge to break inside of a powerful man’s mind (the victim), and install a thought into his head to change the future. The group of people make a dream plan that the group is in compliance with, they all go to sleep at the same time, and show up in the same dream together and take on the challenge and obstacles as a team. In this challenge given, the group sets out to travel through 3 layers of this joint dream with their victim by their side, who is also simultaneously sedated/dreaming (against his will) in the same room with them in reality. The group’s goal is to get inside of the victim’s vault of secrets in his mind (inception), which can only be found in the 3rd level of the dream, which is stored in a ‘dream within a dream’-a very challenging place to get to with personal projections and obstacles created by the group’s imaginative sub-conscious (having to pee in a dream, an enemy appearing in your dream)! Leonardo (Cobb) has a disturbing lingering projection (memory) that makes the group’s challenge even harder!

Are you totally confused!? Hopefully it will make more sense when you see it!

It’s one of those movies you have to follow all the way through, and you CANNOT take a bathroom break for the whole 2 hours and 22 minutes because you’ll be so lost! The movie does not feel long though. Make sure you see it at the IMAX too! The best picture and sound!