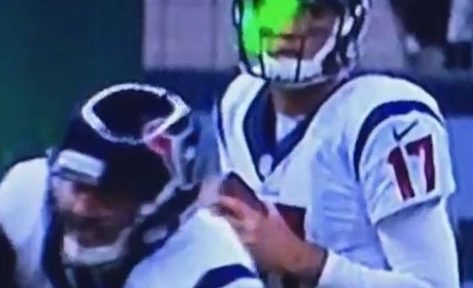 Texans QB Brock Osweiler‘s season just went from bad to worse after someone in the crowd used a powerful green laser to repeatedly blind him during play.

Osweiler was doing great against the Oakland Raiders broadcast from Mexico Monday night, that is until someone started pointing a bright green laser in his eyes. Soon after these lasers started hitting his eyes, Osweiler threw an interception on a terrible pass that had almost no chance of being completed. (Yes, we know he did not get picked because of the lasers earlier in the game. He got picked because he’s still Brock Osweiler.) This is not the first time there’s been a laser pointer issue at Azteca Stadium in Mexico City. United States men’s national soccer team goalie Tim Howard once received the same treatment. Brock Osweiler should feel special. He’s getting the Tim Howard laser pointer at your head treatment at Azteca The “Monday Night Football” broadcast crew acknowledged that security at the game was looking for the person h/t cbssports