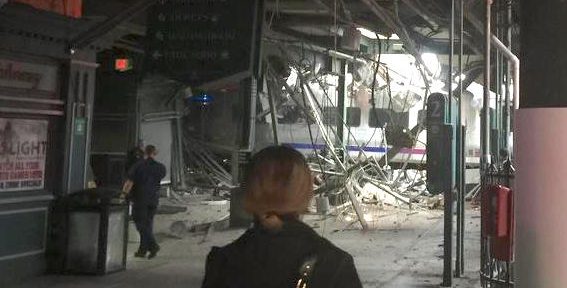 Preliminary reports suggest the 8:45 a.m. crash – involving train No. 1614 on the Pascack Valley Line from Spring Valley – was accidental or caused by operator error, according to five law enforcement officials. They stressed it was early in the investigation, though. Sources told NBC New York one of the fatalities was a woman who was on a platform in the station. NJ Transit was expected to hold a news briefing later Thursday. Pictures on social media showed serious damage to the train and extensive structural damage to the station. At least one of the NJ Transit cars appeared to be partially inside the building, with some of the supporting beams that hold up the canopy over the tracks caved in around it. Photos showed emergency crews standing on piles of rubble, peering into the mangled wreckage of the train in a frantic search for survivors. h/t nbcnewyork It appeared the train went through a bumper stop at the end of the track. It came to a stop in a covered area between the station’s indoor waiting area and the platform. From above, chopper footage showed the glass arches atop the building crunched like an accordion over the platform.

NJ Gov. Chris Christie said there was no indication the crash in Hoboken was anything other than accident.