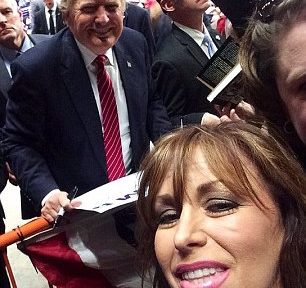 Paula Jones, who famously took legal action against Bill Clinton for sexual harassment in 1994, has thrown her support behind Donald Trump for president.

Jones posted a snap of herself with Trump in the background while attending his Little Rock, Ar., rally. The outspoken former state employee posted the picture with the words: ‘Donald Trump thanks for stopping and allowing a selfie!’ A video, filmed at the same time as the selfie on Wednesday, shows Jones screaming with excitement as Trump walks near to where she stands behind the barriers.

She shouts: ‘Paula Jones! Paula Jones! I want a selfie!’ which she then takes with Trump. h/t dailymail The pair appeared to then have a brief conversation, but what they said was not audible over background noise.