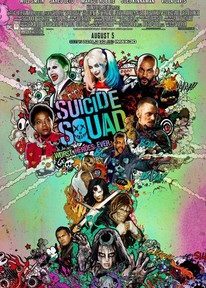 In a year overloaded with comic-book movies, “Suicide Squad” just seems like more of the same. Soren Anderson, Seattle Times.

On paper, this could have been the antidote to an increasingly codified strain of comic-book movies, but in the end, it’s just another high-altitude version of the same.

Peter Debruge
Variety
A gleefully nihilistic, abysmally messy romp that delights in upending the genre’s conventions and tries desperately to, like, totally blow your mind with its outre freak show.

Jake Coyle
Associated Press
Who stole the soul of Suicide Squad? I’d say it’s Ayer’s willingness to go all limp-dick and compromise his hardcore action bona fides for a PG-13 crowdpleaser that would rather ingratiate than cut deep, or even cut at all.

Peter Travers
Rolling Stone
What a waste of a perfectly twisted Suicide Squad.

Richard Roeper
Chicago Sun-Times
It’s probably best to think of “Suicide Squad” as a primer, an entry into a side world of the DC Universe that may pay bigger benefits in later films.

Bill Goodykoontz
Arizona Republic
Suicide Squad isn’t a typical next step in universe building but it’s all DC has going for it right now. Ayer’s movie will make a lot of money, but in the black hole of comic geekdom he won’t make many friends.

Steve Persall
Tampa Bay Times
It doesn’t necessarily fall to this film to define what a villain’s journey really means. But like its characters, it’s free to operate on its own terms, and it’d be a much stronger story if it took full advantage of that freedom.

Tasha Robinson
The Verge
Suicide Squad isn’t exactly the movie that audiences are hoping for, and not the bounce-back that the series needed after Batman v Superman: Dawn of Justice.