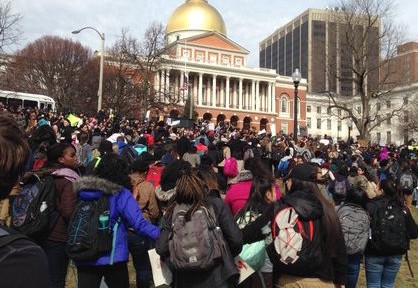 The Boston Public School District (BPS) is facing a budget deficit ranging from anywhere between $10 and $50 million for 2016. BPS students are calling out Mayor Marty Walsh for granting huge corporate tax giveaways while forcing schools to cut important curriculum and lay off faculty and staff. BPS Superintendent Tommy Chang estimates the budget deficit is approximately $50 million, but Mayor Walsh estimates the figure to be $10 million. $18.6 million of the budget deficit comes from the district being forced to pay for charter schools that enroll BPS students. While the State of Massachusetts is supposed to reimburse BPS for the charter school costs, it didn’t even cover half of the expenses last year. h/t usuncut A recent city-approved property tax break for General Electric is to blame for another $25 million that could’ve gone toward plugging the BPS budget gap. GE also receives an additional $151 million in city and state tax incentives. In return for all of the tax breaks, GE is only directly employing 600 people, which the state estimates will result in an additional 590 indirect jobs.