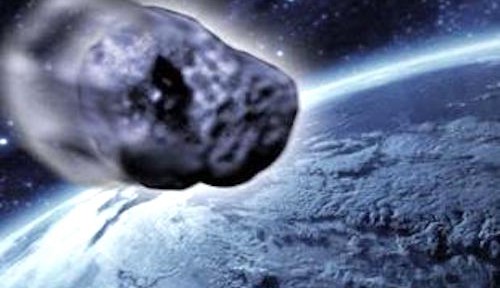 In about two weeks, 2016 TX68, which is almost the size of an Olympic-size swimming pool, will race by as close as 11,000 miles from Earth, say scientists. NASA says there is “no chance” of impact, but when it comes to its returns in 2017, scientists make no such guarantee. Astronomer Gerald McKeegan at Chabot Space and Science told the Contra Costa Times, “it’s gonna be close.” How close? Scientists have given a range: it could be as far out as 9 million miles, or as close as 11,000 miles. “It’s going to miss us,” says McKeegan, “There’s nothing to worry about.” You see, this relatively small asteroid has been around a while. It flew past Earth, and missed by 1.3 million miles about two years ago. And while TX68 is a guaranteed miss this year, NASA says there’s a remote chance of impact on September 28, 2017. h/t sanfrancisco.cbslocal TX68 will fly by Earth again in 2046 and 2097, but the risk of impact diminishes with each fly-by. TX68 is 1 of 5 asteroids approaching Earth in the next week. The closest will miss us by more than a million miles. Or so we’re told.