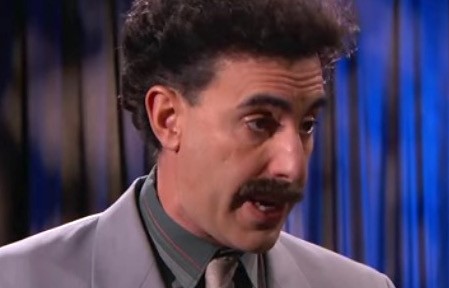 Sacha Baron Cohen, aka Borat, made a surprise visit to Jimmy Kimmel Live to promote his new movie, but before you get too excited be aware, Borat is not in the movie.

Cohen showed up on Kimmel to talk, (albeit in broken english,) about “The Brothers Grimsby,” his new motion picture about two brothers, one who grows up to be a high-profile spy while the other ends up a very simple family man. During his appearance Cohen took time to bash GOP frontrunner, Donald Trump saying “The only person who would ban Muslims is someone with a brain like a female chicken. It is [Trump] clearly a parody of a rich American racist.”