US Dropped This Leaflet Warning ISIS Fighters Of Impending Airstrike 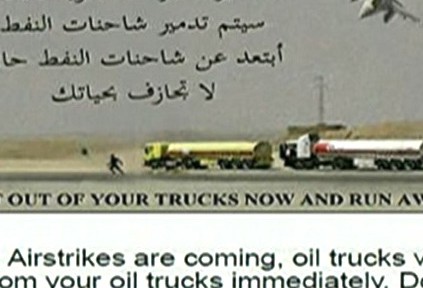 “In Al-Bukamal, we destroyed 116 tanker trucks, which we believe will reduce ISIL’s ability to transport its stolen oil products,” Warren said. “This is our first strike against tanker trucks, and to minimize risks to civilians, we conducted a leaflet drop prior to the strike. We did a show of force, by — we had aircraft essentially buzz the trucks at low altitude.”

The leaflets, which fluttered to the ground about 45 minutes before the strikes, simply said: “Get out of your trucks now, and run away from them. Warning: airstrikes are coming. Oil trucks will be destroyed. Get away from your oil trucks immediately. Do not risk your life.”

“We combine these leaflet drops with very low altitude passes of some of our attack aviation, which sends a very powerful message,” the colonel added.

He said the decision to drop warnings came after they “assessed that these trucks, while although they are being used for operations that support ISIL, the truck drivers, themselves, probably not members of ISIL; they’re probably just civilians.”

Thus, they tried to come up with a strategy “to kind of shoo people away without harming them.”

“So we had to go through that whole process of one, determining whether or not we felt it was in our best interest to strike these trucks. And then once we determined that, yes, it is in our interest to strike these trucks, how do we go about ensuring that we’re able to mitigate the potential of civilian casualties? And these things take time,” Warren said. “…We know the oil funds more than 50 percent of ISIL’s operations. This is something we want to take away from them. That we want — that we need to take this away from them so that they’re — so they’re operations are more difficult to conduct.” h/t frontpagemag Officials maintain the flyer drop on ISIS trucks was aimed at giving the drivers a heads-up, many who may or may not be ISIS members.