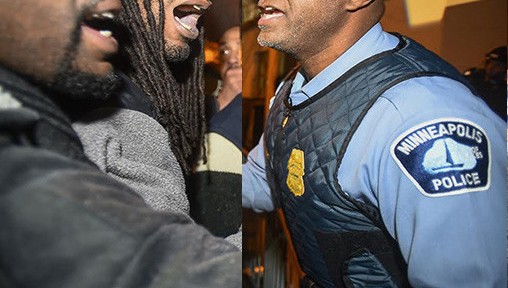 Three people protesting cops at a police Precinct north of Minneapolis have been hospitalized after a shooting Monday night, police say.

Witnesses at the scene say they were white supremacists that were hanging around the rally before they were asked to leave. Witnesses claim the men came back a short time later and fired six shots at protesters just north of the precinct, on the 1400 block of Morgan Avenue North. The shooters remain at large. Minneapolis Police Deputy Chief of Staff Medaria Arraadondo says all three victims are being treated for non-life-threatening injuries at North Memorial Medical Center. Police say the three suspects are still at large. A crowd gathered at the scene, and emotions were running high. Witnesses say Clark was handcuffed when an officer shot him in the head. Police dispute that claim, saying Clark was trying to grab an officer’s firearm, and that they were justified in using deadly force. h/t minnesota.cbslocal

The group Black Lives Matter has called on city leaders to release video footage captured of the incident, but authorities say it would harm their investigation into the incident. Protesters are camped outside the 4th Precinct in north Minneapolis, refusing to leave until the footage is made public.