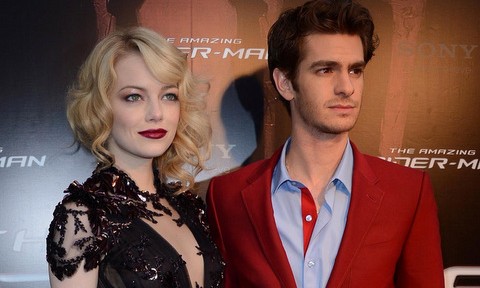 A source claims the former actually split several months ago, but the break-up was amicable.

The insider said, “There was no drama, they’ve been apart while working. They still care about each other.”

Garfield, who is currently filming a movie in Australia with Vince Vaughn and Mel Gibson. He was recently spotted with another woman as they left the Pelicano bar in Double Bay.

The report states that an on-looker yelled out, “Where’s Emma Stone?”, to which Garfield replied, “we’re not together anymore.”

Andrew spoke to Entertainment Tonight over the summer after reuniting with Stone, saying he was ready to have children.

Garfield said, “I have a longing to be a father myself. Being a dad is something I’d like to be at some point.”

Andrew previously described the moment that he met Emma and said that filming with her was both “wild and exciting”.

The Spider-Man star told Teen Vogue, “It was like I woke up when she came in. She was the last person to screen-test, and I was so bored of it by then that I was mucking about – I’d been pretending I was Tom Hanks or Seth Rogen.

“And then she came in, and it was like diving into white-water rapids and having no desire to hang on to the side. Throughout shooting, it was wild and exciting. I couldn’t help but try to stay with her, keep pace with her, and not let her get away. Like an animal preying on a smaller animal, but a wily smaller animal”.

Emma is just gorgeous! We are certain she will have no problem finding a new man!