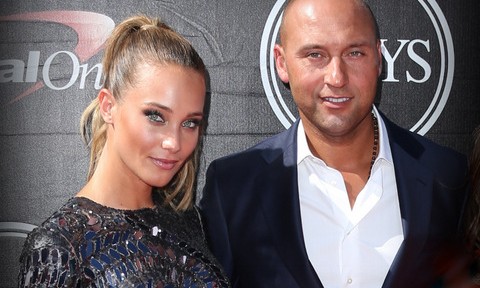 Derek Jeter is known for his baseball career, but also for being quite the playboy and dating some of the hottest women in Hollywood.

The Yankees player, who retired last year, is now reportedly ready to settle down with model Hannah Davis. Jeter is reportedly engaged to the stunning model, who he has dated for the past few years.

A source revealed that Hannah is wearing an engagement ring and that her family is very happy for her.

Jeter, 41, admitted in February 2014 that he was ready to get married and have children.

During his press conference that year to announce his retirement from the New York Yankees, Derek stated, “I want to have a family. Time is important and there are some things I look forward to doing.”

There were first reports that Derek was dating the Victoria’s Secret model in 2012, after they were spotted together at a New York club.

Just months later, there were reports Derek and Hannah had already split. But the couple were spotted walking the red carpet at the Met Gala months later.

Jeter, who led the Yankees to five World Series titles, has been linked to a bevy of Hollywood beauties.

His most serious relationship was with actress Minka Kelly, who he dated for three years before splitting in August 2011.

Jeter appeared to have a pattern of splitting with girlfriends when they started to become more famous.

Derek Jeter has obviously overcome that pattern and is ready to tie the knot. Jeter’s fiancee Davis was featured in the famous Sports Illustrated Swimsuit Issue in 2013 and 2014 before she landed the cover this year.