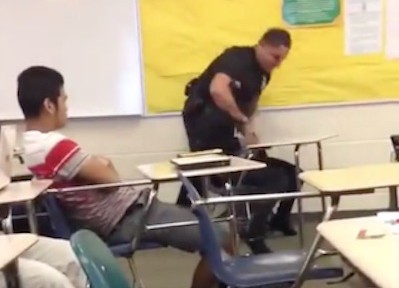 The F.B.I. is now investigating a confrontation between Ben Fields, a sheriff’s deputy who works as a “school resource officer,” and a female student, 14, at Spring Valley high School.

A classmate who videotaped the assault has since been arrested. Before his arrest, Tony Robinson Jr., gave local media the following account, noting that the girl had pleaded with authorities at points because “she really hadn’t done anything wrong”: We were doing an assignment on the computer, and I believe the girl had her phone out. And so our teacher, Mr. Long, came over, asked for the phone, you know. She denied, said, “No,” then shortly after that, he threatened to call an administrator. … When [the administrator] came, [he] tried to get her to move and pleaded with her to get out of the seat. She still denied, because she really hadn’t done anything wrong. She said that she had [taken] her phone out but it was only for a quick second, you know. [She was saying,] “Please,” really kind of begging, [being] apologetic on what happened and everything. So next the administrator called the resource officer, Deputy Fields, and when he came in, the first thing he said was—he asked my friend to move the desk. And to me that is a sign of—he could already tell what he was about to do, you know as far as the precaution he was going to take for [my friend]. So after he told him to move the desk, he did, and the video shows [Fields] shutting her Chromebook and putting it on another person’s desk. He asked her again, “Will you move? Will you move?” She said, “No. I have not done anything wrong.” He said, “I’m going to treat you fairly.” And she said, “I don’t even know who you are,” I believe you can hear that in the tape. And that is where it started right there. h/t colorlines

Sheriff’s department spokesperson Lt. Curtis Wilson said that Fields, who is white, has been placed on unpaid administrative leave pending an investigation. This morning, Sheriff Lott told the media that he was the one who asked both the FBI and the Justice Department to investigate the incident.