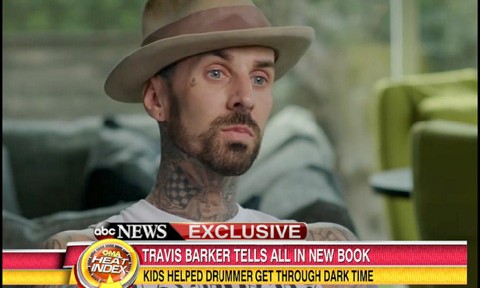 Barker spent four months in the hospital to treat his severe burns and underwent 27 surgeries.

Travis told “Good Morning America“, “The plane’s on fire and my hands are on fire so I unbuckle my seat belt and I jump right into the jet, which holds all the fuel. I basically ignite my whole body in fire.

I’m so soaked in jet fuel, there’s nothing I can do to put the fire out…
“I’m completely nude at this point… I’m running, grabbing my testicles, my genitals, because, I don’t know why, and then we realize, you know, we’re out of the plane and… the plane explodes.”

The psychological impact of the accident made the drummer suicidal. He admitted, “I would call friends of mine and go, ‘‘You know, I’ll deposit a million dollars into whoever’s bank account. Like, I’m done’. I mean, they had to take my phone out of my room because I was making these phone calls”.

He credits his children with ex-wife Shanna Moakler, Landon, 12, and Alabama, 9, with helping him overcome his depression. Travis became emotional discussing the impact on his kids, saying, “It was just hard for them to see me in the state that I was in, like, you know, they color in class and… everyone’s drawing pictures of their family or what they did on the weekend and Landon’s drawing a picture of a plane crashing”.

He adds, “I mean it was definitely something that, I mean, he was old enough to understand.”

The other survivor of the plane crash with Barker was Adam Goldstein a.k.a. DJ AM, who died of an accidental drug overdose a year after the crash in 2009.

The drummer has been romantically linked to singer Rita Ora. They reportedly met at the Power 106 All-Star Game in September.

Barker said earlier this month, “She’s awesome. She’s one of those great things that happen that you’re like: ‘Whoa, wasn’t expecting that.’ And I just never second-guess it. Just enjoy it.”