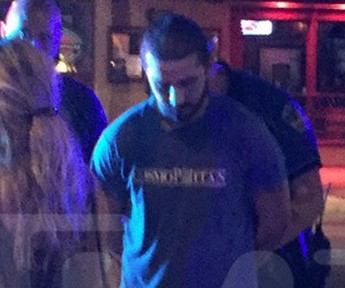 Shia LaBeouf was arrested in Austin, Texas tonight for what may boil down to drunk in public, jaywalking and disobeying a police officer’s commands.

Witnesses to the Transformers star’s arrest said he was acting bizarrely and appeared extremely intoxicated. It happened at around 7:45 PM CT outside a bar on 6th street. A witness says Shia was either extremely drunk or high on drugs when he ran down the street and jaywalked in front of police. They warned him not to do it but he continued, acting bizarrely. Cops subdued him and put him in cuffs. Shia, who’s been to rehab, has been dogged by substance abuse problems. He had a similar situation in NYC last year, where he was arrested after acting crazy at a Broadway play. h/t tmz

LaBeouf is in town for the Austin City Limits music festival.