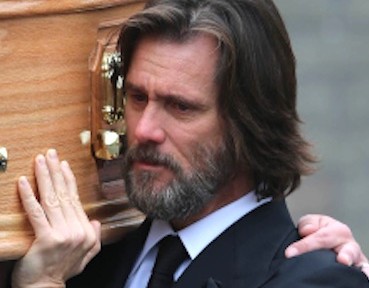 Jim Carrey served as a pallbearer for his ex-girlfriend, Cathriona White, at her funeral in Ireland on Saturday. She committed suicide on Sept. 28th.

White, 30, was found dead in her residence in Los Angeles on Sept. 28, of an intentional pill overdose. The Irish-born makeup artist had dated Carrey, 53, on and off since meeting in 2012 and had just broken up with him recently after dating for a few months, the LAPD told NBC News. Carrey was one of hundreds of mourners at Our Lady of Fatima church in the village of Cappawhite in County Tipperary. The actor and comedian, dressed in a black suit, was one of six people who carried White’s coffin from the church to a local cemetery, where she was reportedly to be buried next to her father Pat. He died in 2012 of cancer. h/t nbcnews

White is said to have cited her breakup with Carrey in her suicide note.